Just a few years out of Princeton, where he’d captained the Tigers basketball team to the Ivy League championship as a senior, John Rogers started Ariel Capital Management on a shoestring.

That was 1983. There wasn’t much money in the early days. But through Ariel’s focus on making patient, strategic investments in small- and medium-sized businesses, the company grew.

Count Regions Bank among Ariel’s clients. Since 2018, Ariel has managed investments for Regions’ pension fund, which is available to long-term associates.

“Ariel had what we needed,” explained Alan McKnight, chief investment officer for Regions Asset Management. “We place a premium on business diversity, and a few years ago we recognized an opportunity to increase diversity among the firms we use for managing the pension fund. We looked at several firms, and we felt Ariel was the best. Since that time, we’ve maintained a dialogue with Ariel to explore additional opportunities to work together.”

Chris Glaub is the corporate benefits manager for Regions. While expanding the company’s focus on supplier diversity is an ongoing priority, the central focus for the retirement fund itself continues to be the protection and growth of its assets, he pointed out.

“We want the best investment advisor, and we feel we have that in Ariel,” Glaub said. “The fact is, they’re very good at what they do.”

For the past seven years, Marcus Lundy has overseen business diversity for Regions, which has seen a 250% growth in diverse suppliers.

“Working with a best-in-class company like Ariel is paramount,” said Marcus Lundy, supplier diversity function manager for Regions. “We’ve followed a simple formula: seek out the best companies, regardless of ownership, and try to develop a relationship. When you are guided by performance and value, the diversity numbers naturally work themselves out.”

“I had a mutual friend who convinced me to learn a little, so I did. And it was a terrific introduction,” Rogers said. “The Regions culture and values are incredible.”

Rogers and his family are no strangers to significant milestones and achievements. His mother was the first African American woman to graduate from the University of Chicago Law School. Rogers himself now serves on the university’s board of directors. Before embarking on a legal career of his own, Rogers’ father was part of the famous Tuskegee Airmen, flying more than 100 combat missions in World War II.

In a recent article in Barrons, Rogers pointed to how Regions’ focus on diversity is “moving the needle,” especially in the midst of a nationwide reckoning on racial injustices in the U.S.

“Honestly, I saw this focus even before the death of George Floyd and before (Rep.) Maxine Waters took over as chair of the House Financial Services Committee,” Rogers said. “With all that’s happened in the last two years, Regions has been way ahead of its peer group by focusing on doing the right thing.”

The bank’s focus on diversity and inclusion extends beyond the workplace; it also defines how Regions serves customers and communities. 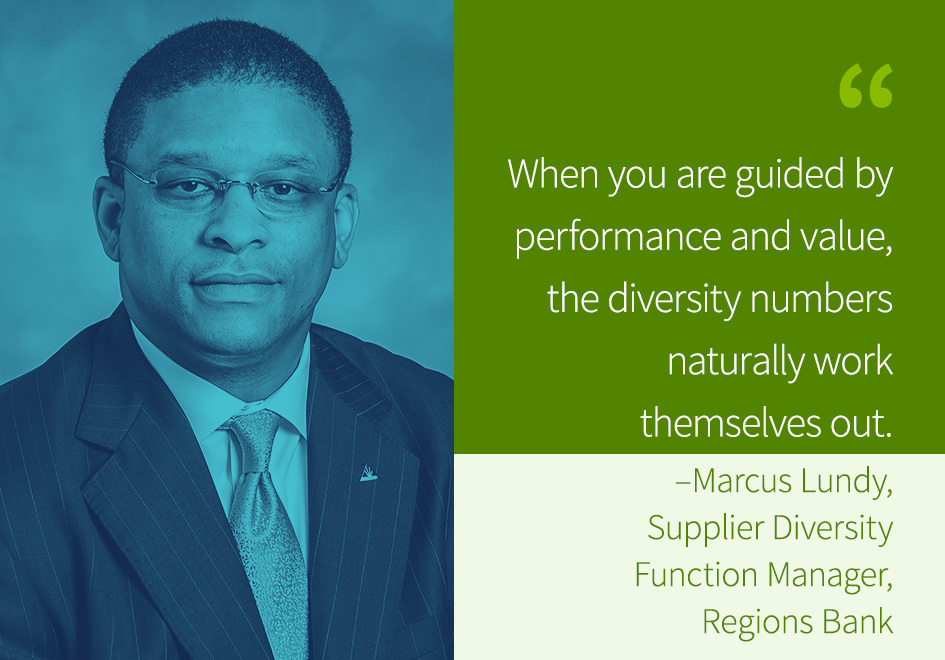 “Our team has seen Regions’ openness to work with minority businesses,” Rogers added. “At Ariel, we want to make sure that people of color are being included, and that’s what’s great about Regions’ leadership. Regions has become a role model on how to do this and do it well.”

Lundy’s focus on working with minority-owned vendors is a reflection of that commitment.

“Diversity is an extension of our core values because we are active in the diverse communities we serve,” Lundy said. “We first got to know Ariel through Mellody Hobson, co-CEO of Ariel Investments. And one of the first things I said was, ‘You’re with the finest shop on the block, and you just happen to be diverse.’ It took a few years, but now we have a relationship, and I only see it continuing to grow.”

“We would love that,” Rogers said. “Regions is a leader in working with and providing opportunity to minority-owned businesses and financial services. Truthfully, very few banks are doing that. Now, after the tragedy of George Floyd, people are ‘finding religion.’ Regions found that long ago.”

My GreenInsights Gets an Upgrade

What do Regions, RC Cars and Machine Learning Have in Common? Data Science Day