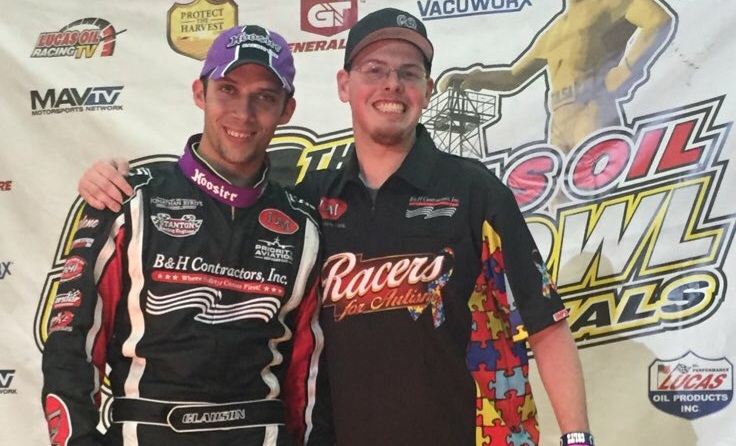 Bryan Clauson made his name as a champion on dirt tracks, and had experience in both NASCAR and at his hometown Indianapolis 500. Although born in California, he was bred a Hoosier, and was a proud alum of Noblesville High School.

Noblesville took pride in another alum. Ben William Hodgin, who was diagnosed with Autism Spectrum Disorder when he started school and learned numbers, words and colors by watching NASCAR races. He learned to count by manipulating model race cars, combining racing numbers to create math problems.

One day, while Ben William was still in elementary school, players from the Noblesville High football team came to his door selling souvenir cards of the team, and instantly gained a fan for life.

“On Friday Night, we had nothing better to do but go to the (high school football) game,” explained his father, Ben. “It was the first time Ben William had been close to football players. He lit up like a Christmas tree and began matching the players in the program with numbers on the field and wouldn’t stop talking about it.”

A week passed. Another Friday. Young Ben William wanted to catch the next game. A week later, he talked his parents and friends down the street into taking a road trip to see the Millers play away from campus.

Twenty years later, Ben William Hodgin has yet to miss a game, home or away. Next fall marks his 200th game, many spent as the team’s manager. In honor of his 100th consecutive game, the town held a day in Ben William’s honor.

“Most folks on the (autism) spectrum have something they focus on,” Ben explained. “For Ben William, that focus is sports. We noticed the first time we had a NASCAR race that on he was entranced. And when he watched ballgames, we knew this was different.”

As Ben and his wife, Beth, learned more about autism, they got more involved with others. A mortgage banker for Regions, Ben is now on the Board of Directors for the Autism Society of America.

Shortly after the elder Hodgin joined the company, Regions received the “Innovative Program: Autism
Friendly” award from the Autism Society of Alabama. Ben learned that Regions’ commitment wasn’t limited to one area.

“I’ve worked with big players in banking, but I’ve never seen a company do what Regions has done for autism,” said the senior Hodgin. “I was thrilled with the decision to come to Regions because of the culture, the focus on making the experience better for everyone. From the first time I talked to the folks here, and every time I go on business to Nashville and Birmingham, I see this caring culture again and again.”

Kathy Lovell, the Americans with Disabilities Act Manager for Regions, said the bank’s commitment stems from its values.

“Regions has been very proactive in creating a corporate culture that makes individuals with disabilities feel welcome,” Lovell said. “This commitment to inclusion extends to serving individuals who are on the autism spectrum, as well as their families and caregivers. This culture supports two of Regions core values: Making Life Better and Doing What is Right.”

The friendship that developed between racer Bryan Clauson and Ben William Hodgin took the two to tracks across the country.

‘Wow!’
Bryan Clauson had a big reputation, and an even bigger heart.

Clauson was still in high school, and newly signed with Chip Ganassi Racing, when he first met underclassman Ben William. A few years later, during Ben William’s senior year, he and Bryan reconnected at a Noblesville basketball game. “The two hit it off, and Bryan loved talking racing with Ben William. The two were close friends from that day forward,” said Ben.

When Ben William completed high school, with the Hodgins uncertain of what his future would hold, the family decided to take his graduation gifts and combine them with a contribution from a separate fundraiser held by the Clauson Family promoting Bryan’s first run in the Indy 500. Their combined effort resulted in the establishment of the Noblesville High School Athletic Hall of Fame.

The event was a success, and their relationship continued to blossom.

“It drew some of the biggest names in racing, along with guys who couldn’t rub two nickels together for a sponsor. It’s the backyard barbecue of racing, and it’s incredible,” said Ben.

With his friendship with Ben William in mind, Clauson wanted to kick off Chili Bowl week with a Monday Night event to raise money for autism. Lauren Stewart, Bryan’s fiancée, and car owner, Joe Dooling. came up with “Racers for Autism,” featuring barbecue, beer and an auction.

Bryan and Lauren took the cash receipts and shipped the funds to the Maryland headquarters of the Autism Society of America. Almost instantly, the group’s President and CEO, Scott Badesch, was on the phone, asking questions about the event that had been totally off everyone’s radar.

“They were very excited,” Ben said. “They’d held galas and other events, but nothing like this.”

A year later, the newly formed Racers for Autism, led by Bryan, held another Chili Bowl kickoff. This time, they raised more than $75,000.

“And that’s when Bryan challenged everyone to do more,” Ben said.

One day, an old 1990s pickup showed up in the Hodgin driveway, a gift from Dooling, Bryan’s car owner. Bryan soon was giving Ben William one of his first driving lessons.

The friendship continued to grow, not only between Ben William and Bryan but between the two families as well. The Hodgins followed Clauson’s races, often in person. That included a trip to Kansas for the 2016 Belleville Midget Nationals race.

“Bryan was leading the race, flying like a rocket, when a car came into his line – a lapper (one lap behind),” Ben remembered. “And there was a wicked accident.”

Clauson’s car climbed the rail, then flipped and was struck from behind by another driver who didn’t have time to clear the accident.

Clauson was 27 years old, engaged to be married.

And in an instant, the ever-present smile, the ability to lift spirits and make lives better for people he didn’t even know was but a memory.

A Legacy Lives On
The most recent Racers for Autism event raised $165,000. The Autism Society of America has created the Friendship Award, in honor of Bryan and Ben.

Bryan’s death hit young Ben William extremely hard. “He was regressing,” his father explained. “He was so motivated by his relationship with Bryan, but that was gone.”

The Autism Society of America asked Ben to join the board, helping raise funds on a national level. The nonprofit also asked Ben William to join its staff and help raise funds across the country, giving him purpose that had seemingly been lost in Belleville.

A year after his death, Clauson was inducted into the National Sprint Car Hall of Fame. In Iowa, car owner Richard and Jennifer Marshall, along with family, friends, fans, and legendary race car drivers funded the Bryan Clauson Suite Tower in turn two of the Knoxville Raceway in his honor.

At age 16, Clauson signed up as an organ donor.

So Bryan lives on, through his donation of life to others, including heart recipient Dan Alexander, who both the Clausons and Hodgins have befriended. In fact, after his death, a national organ donation campaign —Driven2SaveLives — picked up more than 6,000 new donors who made the commitment in honor of Clauson.
To the Hodgins back in Indiana, though, he was the local hero who forged a special friendship with a young man, and became part of the family.

“He accomplished so much in 27 years, he changed our lives completely,” Ben said. “And he changed so many lives that he touched.”