Shawntelle Fisher (right) is using her powerful story, years of experience and a community-minded focus to serve and empower others along their reentry journey. For Lisa Burnett (left), Fisher’s support has been transformational in overcoming challenges and offering hope.

Shawntelle Fisher was in prison – for a seventh time – when she had a jarring realization.

Fisher’s 20 years of intense struggles began around the age of 17. She was writing bad checks, trying to get by, while also taking care of a 2-year-old daughter.

“It was about hustling to survive on the streets,” she said.

“I got into trouble when I was struggling to raise my child alone,” said Burnett. “I was ‘robbing Peter to pay Paul,’ as the saying goes. And I was using drugs and drinking. Anything to numb the pain.”

For Fisher, the journey began with that unsettling epiphany in prison.

“I learned to make different choices and realized the guards treated me differently,” said Fisher.

There was one guard who especially encouraged her. “‘Go back to college,’ she told me. ‘Let’s help you do that.’ She invested in me.”

Fisher pursued her education, completing a two-year program in just one.

“That was transformational for me,” she said.

Achieving academic success boosted Fisher’s confidence. It also led her to the Neighborhood Leadership Academy, where she took her next step by writing a business proposal to establish a nonprofit. In 2012, Fisher set up The SoulFisher Ministries, which provides workforce training and educational resources for women like herself and Lisa Burnett as they reenter society.

The ability to support – and partner with – nonprofits like SoulFisher is why Regions Bank leaders in St. Louis, Missouri, started the Community Collaboration Forum.

Each year, organizations are brought together by Regions to figure out how they and the bank can work together to address urgent social needs.

“This is about creating an environment that encourages collaboration,” said Mike Hart, Greater St. Louis Market Executive for Regions. “We want to foster a more connected community that consistently partners in uncommon ways.”

In this case, the collaboration is between SoulFisher and the University of Missouri–St. Louis. With a focus on helping justice-involved women experience a smoother transition during reentry to society, SoulFisher provides a variety of programs and services. That support includes housing assistance, financial education, mental health resources, employment coaching and more.

Lisa Burnett met Fisher while incarcerated. Following Burnett’s release, SoulFisher provided everything she needed – even down to life’s necessities.

“Many women come home with nothing,” said Burnett. “No clothes, no shoes. Shawntelle helped me find a new apartment and gave me furniture with the tags still on it. It was beyond anything I’ve ever had. It’s incredible.”

At Regions’ 2019 Community Collaboration Forum, Fisher pitched an idea she and UMSL Director of Human Resources Jim Hertel developed to a panel of independent judges. A $25,000 grant from Regions was at stake.

“I had been going to the Regions events each year,” said Fisher. “I love collaboration, so the idea couldn’t just be about us. I asked myself, ‘What can we do that no one else is doing?’”

Fisher and Hertel’s idea was bold. The SoulFisher Ministries and UMSL would bring together a panel of researchers and local business leaders who have hired justice-involved people and encourage St. Louis hiring managers to do the same. They named it “Successful Second Chances.”

“Justice-involved people face obstacles related to fear and bad assumptions that employers have about them,” said Hertel. “Employers tend to over-estimate the risk associated with hiring them, and they underestimate the benefits that come from hiring people who have just left an experience where they were expected to work, be on time and are used to working and living in a structured environment.”

Fisher and Hertel’s creative concept proved a winner, impressing the judges and capturing the grant.

Beyond the joy of receiving funding, the partnership has deeper meaning for Fisher as a UMSL alumna. She continued her education there, earning two bachelor’s degrees: one in education studies and one in media studies. She also completed a master’s degree in social work.

And Fisher is grateful to Regions for being open-minded in giving programs like Successful Second Chances a chance to succeed.

“We believe this initiative is so important to help others reenter society,” said Fisher. “Our thought was, ‘If the bank can support it, we can do it.’”

Hertel agreed, noting, “It takes a unique mix of courage and empathy for employers to incorporate justice-involved people into their hiring strategy. It requires talking with them, letting them tell you their story before making a decision.”

Fisher has come a long way from the days when she sat in a cell, dreaming of more.

She admits to moments of doubt and early challenges while founding The SoulFisher Ministries.

“It was really tough,” she said. “I didn’t know the first thing about running a business. But God wouldn’t leave me alone about it. And things just lined up.”

Beyond the workforce training it provides for women in reentry, The SoulFisher Ministries began offering academic support for children of justice-involved families. Launched with a $15,000 budget and two tutors, the agency received a significant funding boost in 2017 with a $1.5 million 21st Century Scholars grant.

Fisher and team serve 150 Kindergarten- to eighth-grade students through the Educate Now to Achieve Later (ENAL) program in the Riverview Gardens School Districts. There is a waiting list. And programming expanded beyond tutoring to include coding and robotics classes, nutritional services and more.

“The foundation of where we began has made this what it is now,” said Fisher. 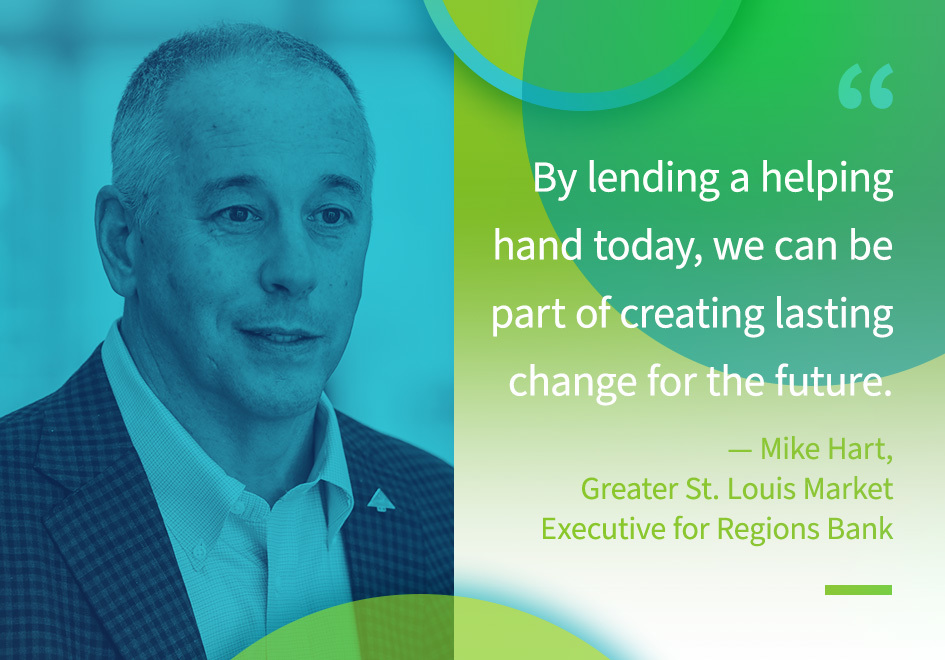 Today, Fisher and Burnett have positive relationships with their adult children. And both are grateful for how their lives have evolved.

“Not many people have this opportunity,” said Burnett. “My heart just explodes from the support Shawntelle has given me. She showed me a different way and gave me the tools I need to succeed. I’m blessed.”

The future looks bright for them and for this unique new partnership with UMSL and Regions.

“The impact is only beginning,” said Mike Hart. “By lending a helping hand today, we can be part of creating lasting change for the future.”

Providing Shelter From the Cold