Boa constrictors and kangaroos and tarantulas, oh my!

They’re showstoppers that elicit a chorus of “oohs and aahs” when The Creature Teacher visits North Texas elementary and pre-school classrooms. Bringing a wildlife program to Fort Worth schools to discuss dental hygiene might seem unusual, but it keeps the audience’s attention, and that’s precisely why college theatre major-turned dentist Scott Ballard turned to the Creature Teacher to help him illustrate the importance of dental hygiene.

“I’m super arachnophobic,” admits Ballard. “But the way I see it, if children can brave seeing the dentist, I can hold a tarantula.”

There’s something to be said for fully engaging a young crowd among a sea of distractions. Lindsay Taylor has seen Ballard do so firsthand.

“Dr. Scott often opens the sessions by saying, ‘I want to talk to you about some nasty, gross stuff today,’” said Taylor, marketing director at Ballard Family Dentistry, who oversees the practice’s community programs. “He gets them engaged and keeps them on the hook. The kids love it. He really does command an audience.”

Meaning after the chinchillas and kinkajous do their part, the learning shifts to people as students discover just how much they and members of the animal kingdom have in common, at least in terms of teeth.

“The Creature Teacher offers students the chance to learn about dental health on their level by teaching them how wild creatures take care of their teeth and what they eat,” said Taylor.

The presentations also affirm that learning doesn’t always have to be serious business.

“Dr. Scott is a really big kid at heart,” said Taylor. “His thought was, ‘What if I can find a way to make something that kids perceive as boring fun?” 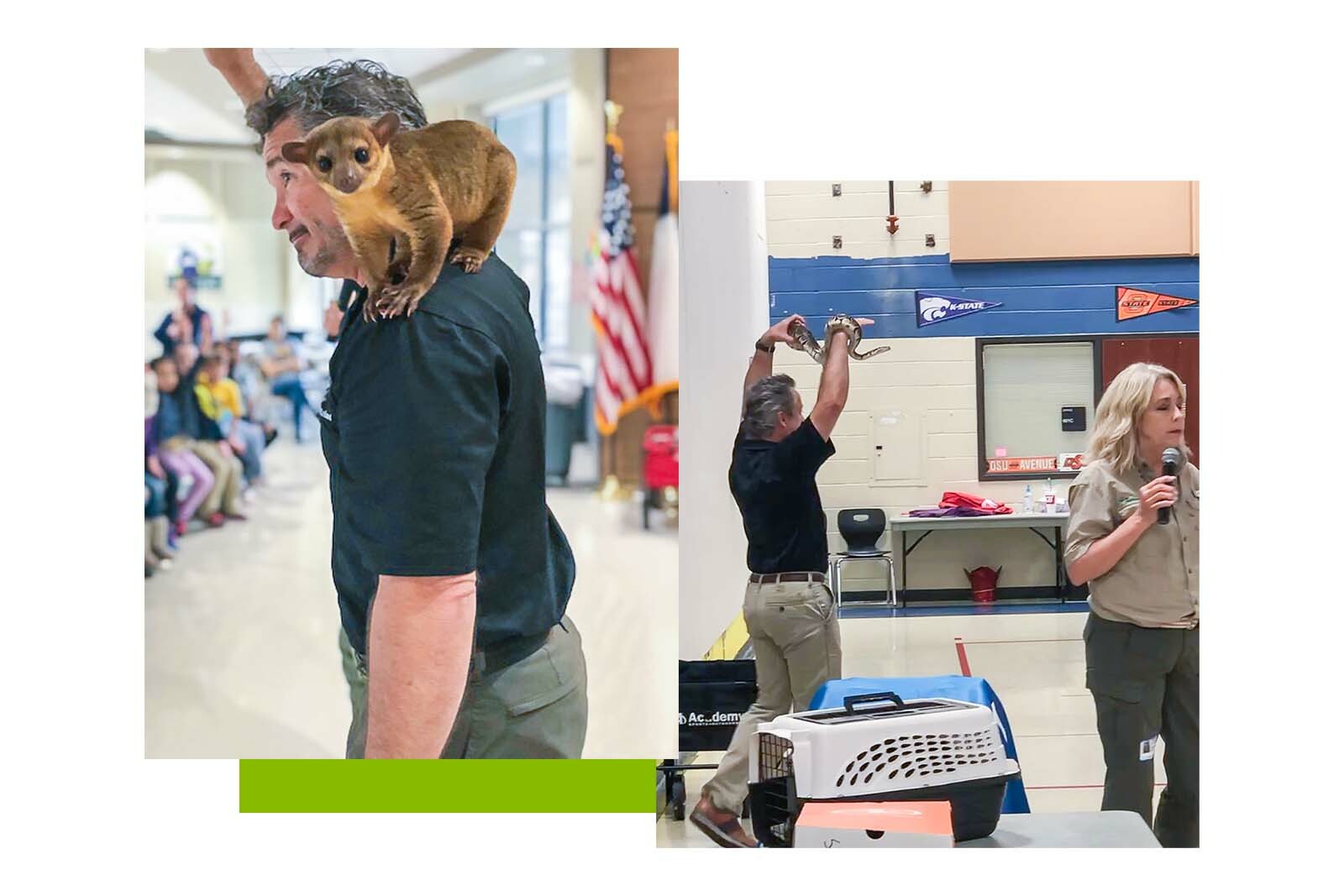 Ed Perry, Commercial Banking relationship manager for Regions Bank in Fort Worth, has seen Ballard’s fun spirit and big heart for more than 15 years. The two began working together when Perry was at a different bank and shortly after Ballard opened his first practice in 2004. Today, Ballard Family Dentistry has grown to seven locations around Fort Worth. The practice is a family business with Scott’s wife and brother running day-to-day operations.

“The Ballards are just a great family who believe in taking care of the area where they live and work,” said Perry. “They are selfless folks who do whatever they can to help people. I’m proud that they are a client.”

That feeling of admiration for Perry is mutual among the Ballard Family Dental staff.

“Ed is part of our team,” said Taylor. “We love Ed. He’s just one of those guys who builds rapport very fast, and he’s genuinely in it to help you. Ed’s also a quick thinker. If you have an issue, he has a solution.”

Beyond sponsoring the Creature Teacher shows for more than a decade, the Ballards distribute free dental hygiene kits to families in need.

Taylor estimates they’ve easily given away 50,000 kits with toothbrushes, toothpaste and dental floss.

“Children who are frequently sick also typically have an oral issue,” said Taylor. “They often go hand in hand. We let the teachers and school nurses know that if they see a need, we’ll give them more kits if they need them.”

But if you think that’s where the Ballards’ generosity ends, think again.

Since those thousands of dental hygiene kits don’t put themselves together, the Ballards sponsor church groups, sports teams and civic clubs by paying the nonprofits to assemble them. The groups are often working toward a project fundraising goal.

Perry coached a girls’ fast-pitch softball team that prepared bags for delivery to assist with covering their travel expenses.

“This served as a great community service project for the girls,” said Perry. “It also offered them a valuable lesson that even the most basic items like a toothbrush and toothpaste aren’t to be taken for granted. To think about not having the basic supplies to brush your teeth and get ready for school is where that need begins for the families this project serves.”

The distribution of hygiene kits didn’t slow down during the pandemic.

“When the schools shut down, Dr. Scott was adamant that we continue the program,” said Taylor. “He said, ‘I don’t care what it takes, I’m not missing a year.’”

Ballard even hired a videographer, allowing students to watch their favorite animal creatures from the comfort and safety of their own homes.

“We continued to provide all the goody bags,” said Taylor. “Parents could scan a QR code on the bag to watch the video, and we shared it with all of the nurses and teachers via email.”

The Creature Teacher program remains in high demand these days among area schools. And, thanks to Perry and Regions Community Development manager Kay Carroll, plans are underway to bring it to children served by one of the bank’s education nonprofit partners in early 2023 as well.

Word has gotten out about how informative, engaging and fun the program is.

“We do at least 15 school locations a year, all free of charge,” said Taylor. “They kind of fight over us at this point as to who gets the program.”

The Creature Teacher has also been around long enough that former child attendees are now entering adulthood. The years have passed, but the memories remain.

“Dr. Scott was somewhere not long ago when a young man easily 18 years old said, ‘Aren’t you that dentist that did that program for me when I was in school?’” said Taylor. “When they see that first animal, they just lose their heads. Every single show we do, it never gets old. When they light up, Dr. Scott lights up like a switch.”

For Ballard, learning the students have remembered a key takeaway year later makes it especially worthwhile.

“Kids will say to me, ‘You’re that kangaroo dentist! I’m still brushing twice a day!’”

Attention audience members, the next Creature Teacher show is about to begin and Dr. Ballard is ready to enthrall the crowd.