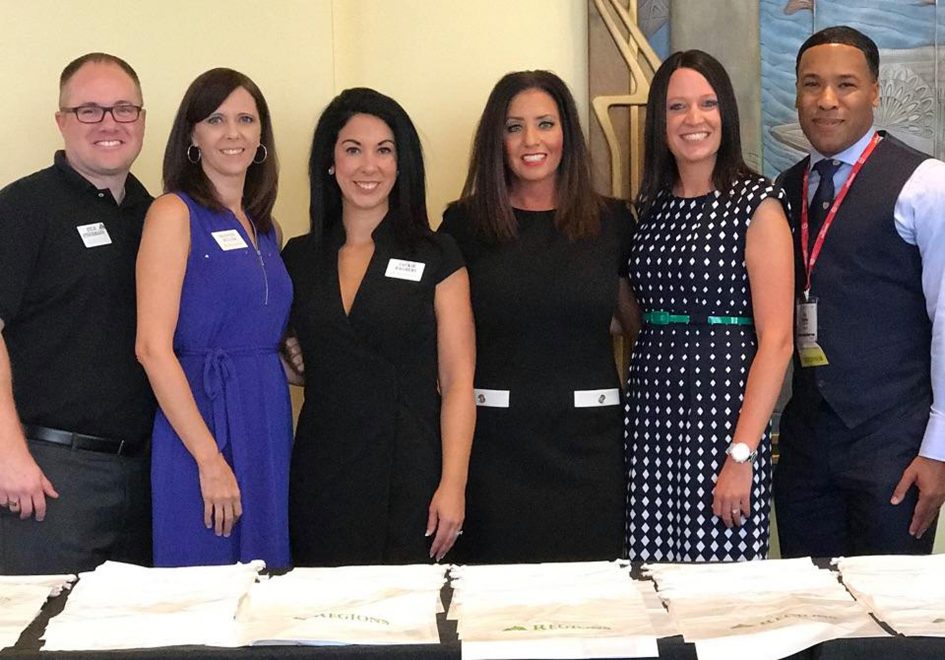 From the outset, Jackie Bagheri’s task was difficult.

Following live music and a visit from a former NFL star, the Regions At Work Regional Coordinator had to face a crowd of more than 1,500 seniors, ranging in age from 55 to 80.

And talk about identity theft.

Welcome to Senior Day, part of the recent National Urban League Conference gathering in St. Louis, where the Midwest Regions team played an active role. Seniors from across Metro St. Louis and Western Illinois received free transportation to learn how to protect their finances thanks to Michael McMillan, the CEO of the Urban League of Metropolitan St. Louis.

“Senior Day is an amazing event, and Michael and his team do an amazing job raising the bar with every signature program,” said Eric Madkins, Regions Midwest Area Community Affairs Manager.

The Regions At Work team delivered, as well.

“We had a big presence there,” said Lauren Korbal, a RAW regional coordinator based in Springfield, Missouri. “We brought in three coordinators from our market – Iowa, Western Kentucky, Missouri and Illinois – and had a Regions table out front.”

And the large, potentially imposing crowd?

They listened and learned.

“Our main concern was to help the senior citizens avoid identity theft because this kind of fraud is running rampant in all of our markets,” Korbal explained. “Honestly, we didn’t know what to expect. But it exceeded our expectations.”

Jackie Snyder, the Midwest Regional On-Your-Site Program and Coordinator Manager, made introductions, bringing Bagheri on to delve into the topic and walking the large gathering through steps toward protecting their money and reputation.

It had to be done concisely, with the team given only a 15-minute window for a presentation that usually goes twice as long.

Even Bagheri was thrilled by the reaction.

“They were receptive,” she said. “There was a lot of eye contact. People were listening, and they came up to us afterward with more questions, or to thank us for the information.”

This is familiar territory for the Regions At Work team. They work with law enforcement on a regular basis. In the case of the Midwest team, that means relationships with 70 police departments from Western Kentucky, Illinois, Iowa and Missouri.

“This isn’t just Regions’ information,” Bagheri said. “This comes from professionals who deal with fraud every day.”

Bagheri’s biggest takeaway for the seniors was to take one simple step.

“Check your credit report,” she said. “Because this is where it’s going to show up that your identity is being used. That’s where it really hits home.”

“We had a steady flow of people at our table,” Madkins added. “Since the event, Kyle Stockmann has followed up with several participants with even more opportunities to provide individualized advice, guidance and education. This was a huge success.”

The National Urban League Conference brought thousands to St. Louis from across the country. Regions also played a role with an exhibit and reception for Painting For Peace In Ferguson, which drew hundreds of visitors and local media attention.