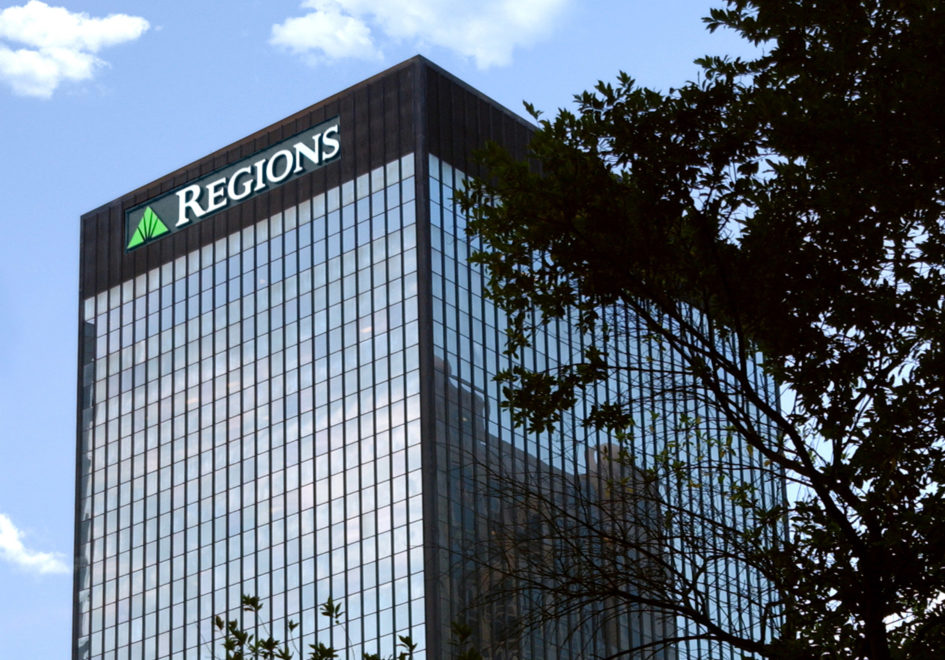 Regions Financial Corporation (NYSE:RF) today announced earnings for the second quarter ended June 30, 2016. The company reported net income available to common shareholders of $259 million and earnings per diluted share of $0.20. “Our results in the second quarter, and throughout 2016, reflect continued progress toward reaching our goals of diversifying revenue streams and making prudent investments that position Regions for further growth,” said  Grayson Hall, chairman, president and CEO. “We continue to focus on managing expenses in a manner that increases efficiency long-term. Further, we are pleased to have successfully completed the Comprehensive Capital Analysis and Review (CCAR) process and received no objection regarding our planned capital actions. This reflects the strength of our process for deploying capital effectively and returning an appropriate amount to shareholders.” During the second quarter, Regions was recognized by the advisory firm Reputation Institute and American Banker magazine as having the best overall reputation among top U.S. banks. Regions was also recognized as having the best reputation among customers – the second consecutive year Regions has earned this distinction. In addition, Regions was recently ranked among the top 10 percent of companies rated in the 2016 Temkin Web Experience Ratings, placing Regions in the category of companies ranked “very strong” in online experience. The ratings are compiled by the Temkin Group, a nationally recognized customer experience research firm. “Regions customers are responding to the deliberate, prescriptive approach we have taken to strengthening customer service and deepening customer relationships,” Hall said. “We are honored to receive these awards recognizing Regions associates’ comprehensive approach to identifying and meeting the needs of our customers and the communities we serve.”

As part of the company’s ongoing plans to operate more efficiently throughout its branch network, during the second quarter of 2016, Regions incurred $22 million of property-related expenses primarily related to the consolidation of approximately 60 branches as well as other occupancy optimization initiatives. These branches are expected to close in the fourth quarter of 2016. Including these 60 branches, Regions has announced the consolidation of approximately 90 branches as part of the company’s previous announcement to consolidate 100 to 150 branches through 2018. The company also incurred $1 million of severance expense. Both of these charges were related to ongoing efficiency efforts as the company executes its plan to eliminate $300 million in expenses through 2018. The company also incurred $3 million of additional legal and regulatory charges related to the pending settlement of previously disclosed matters. In addition, the company benefited from a $6 million FDIC insurance refund related to overpayments in prior periods.

Under the Basel III capital rules, Regions’ estimated ratios remain well above current regulatory requirements. The Tier 1(2) and Common Equity Tier 1(2)ratios were estimated at 11.6 percent and 10.9 percent, respectively, at quarter-end under the phase-in provisions. In addition, the Common Equity Tier 1 ratio(1)(2) was estimated at 10.7 percent on a fully phased-in basis. During the second quarter, the company repurchased $179 million or 19.4 million shares of common stock. In addition, the company declared $79 million in dividends to common shareholders. The company’s liquidity position remained solid with its loan-to-deposit ratio at the end of the quarter at 84 percent, and, as of quarter-end, the company remained fully compliant with the liquidity coverage ratio rule. Additionally, during the second quarter, Regions completed the annual Comprehensive Capital Analysis and Review (CCAR) process and received no objection regarding planned capital actions. In addition to continuing the $0.065 quarterly common stock dividend, planned capital actions include the repurchase of up to $640 million in common shares over the next four quarters and the potential for a dividend increase beginning in the second quarter of 2017. The $640 million share repurchase program was approved by the Board of Directors on July 14, 2016, and the potential dividend increase will be considered by the Board of Directors in early 2017. (1) Non-GAAP, refer to pages 11, 12 and 23 of the financial supplement to this earnings release (2) Current quarter Basel III common equity Tier 1, and Tier 1 capital ratios are estimated. Conference Call A replay of the earnings call will be available from Tuesday, , at 2 p.m. ET through Friday, August 19, 2016. To listen by telephone, please dial 1-855-859-2056, and use access code 26351405. An archived webcast will also be available until August 19 on the Investor Relations page ofwww.regions.com. About Regions Financial Corporation Regions Financial Corporation (NYSE:RF), with $126 billion in assets, is a member of the S&P 500 Index and is one of the nation’s largest full-service providers of consumer and commercial banking, wealth management, mortgage, and insurance products and services. Regions serves customers across the South, Midwest and Texas, and through its subsidiary, Regions Bank, operates approximately 1,600 banking offices and 2,000 ATMs. Additional information about Regions and its full line of products and services can be found at www.regions.com. Forward-Looking Statements This release may include forward-looking statements as defined in the Private Securities Litigation Reform Act of 1995, which reflect Regions’ current views with respect to future events and financial performance. Forward-looking statements are not based on historical information, but rather are related to future operations, strategies, financial results or other developments. Forward-looking statements are based on management’s expectations as well as certain assumptions and estimates made by, and information available to, management at the time the statements are made. Those statements are based on general assumptions and are subject to various risks, uncertainties and other factors that may cause actual results to differ materially from the views, beliefs and projections expressed in such statements. These risks, uncertainties and other factors include, but are not limited to, those described below:

The foregoing list of factors is not exhaustive. For discussion of these and other factors that may cause actual results to differ from expectations, look under the captions “Forward-Looking Statements” and “Risk Factors” of Regions’ Annual Report on Form 10-K for the year ended December 31, 2015, as filed with the Securities and Exchange Commission. The words “anticipates,” “intends,” “plans,” “seeks,” “believes,” “estimates,” “expects,” “targets,” “projects,” “outlook,” “forecast,” “will,” “may,” “could,” “should,” “can,” and similar expressions often signify forward-looking statements. You should not place undue reliance on any forward-looking statements, which speak only as of the date made. We assume no obligation to update or revise any forward-looking statements that are made from time to time. Regions’ Investor Relations contact is Dana Nolan at (205) 264-7040; Regions’ Media contact is Evelyn Mitchell at (205) 264-4551. Use of non-GAAP financial measures Management uses the adjusted efficiency ratio (non-GAAP) and the adjusted fee income ratio (non-GAAP) to monitor performance and believes these measures provide meaningful information to investors. Non-interest expense (GAAP) is presented excluding certain adjustments to arrive at adjusted non-interest expense (non-GAAP), which is the numerator for the efficiency ratio. Non-interest income (GAAP) is presented excluding certain adjustments to arrive at adjusted non-interest income (non-GAAP), which is the numerator for the fee income ratio. Net interest income and other financing income on a taxable-equivalent basis and non-interest income are added together to arrive at total revenue on a taxable-equivalent basis. Adjustments are made to arrive at adjusted total revenue on a taxable-equivalent basis (non-GAAP), which is the denominator for the fee income and efficiency ratios. Regions believes that the exclusion of these adjustments provides a meaningful base for period-to-period comparisons, which management believes will assist investors in analyzing the operating results of the Company and predicting future performance. These non-GAAP financial measures are also used by management to assess the performance of Regions’ business. It is possible that the activities related to the adjustments may recur; however, management does not consider the activities related to the adjustments to be indications of ongoing operations. Regions believes that presentation of these non-GAAP financial measures will permit investors to assess the performance of the Company on the same basis as that applied by management. Tangible common stockholders’ equity ratios have become a focus of some investors and management believes they may assist investors in analyzing the capital position of the Company absent the effects of intangible assets and preferred stock. Analysts and banking regulators have assessed Regions’ capital adequacy using the tangible common stockholders’ equity measure. Because tangible common stockholders’ equity is not formally defined by GAAP or prescribed in any amount by federal banking regulations it is currently considered to be a non-GAAP financial measure and other entities may calculate it differently than Regions’ disclosed calculations. Since analysts and banking regulators may assess Regions’ capital adequacy using tangible common stockholders’ equity, management believes that it is useful to provide investors the ability to assess Regions’ capital adequacy on this same basis. The calculation of the fully phased-in pro-forma “Common equity Tier 1” (CET1) is based on Regions’ understanding of the Final Basel III requirements. For Regions, the Basel III framework became effective on a phased-in approach starting in 2015 with full implementation beginning in 2019. The calculation includes estimated pro-forma amounts for the ratio on a fully phased-in basis. Regions’ current understanding of the final framework includes certain assumptions, including the Company’s interpretation of the requirements, and informal feedback received through the regulatory process. Regions’ understanding of the framework is evolving and will likely change as analysis and discussions with regulators continue. Because Regions is not currently subject to the fully-phased in capital rules, this pro-forma measure is considered to be a non-GAAP financial measure, and other entities may calculate it differently from Regions’ disclosed calculation. A company’s regulatory capital is often expressed as a percentage of risk-weighted assets. Under the risk-based capital framework, a company’s balance sheet assets and credit equivalent amounts of off-balance sheet items are assigned to broad risk categories. The aggregated dollar amount in each category is then multiplied by the prescribed risk-weighted percentage. The resulting weighted values from each of the categories are added together and this sum is the risk-weighted assets total that, as adjusted, comprises the denominator of certain risk-based capital ratios. CET1 capital is then divided by this denominator (risk-weighted assets) to determine the CET1 capital ratio. The amounts disclosed as risk-weighted assets are calculated consistent with banking regulatory requirements on a fully phased-in basis. Non-GAAP financial measures have inherent limitations, are not required to be uniformly applied and are not audited. Although these non-GAAP financial measures are frequently used by stakeholders in the evaluation of a company, they have limitations as analytical tools, and should not be considered in isolation, or as a substitute for analyses of results as reported under GAAP. In particular, a measure of earnings that excludes selected items does not represent the amount that effectively accrues directly to stockholders. Management and the Board of Directors utilize non-GAAP measures as follows: