JACKSON, Miss.—Oct. 22, 2020—Regions Bank on Thursday announced a $225,000 contribution to Children’s of Mississippi, a pediatric hospital that is part of the University of Mississippi Medical Center (UMMC).

The gift was made through the Campaign for Children’s of Mississippi, which was launched in 2016 by Kathy and Joe Sanderson to help fund the expansion of the pediatric hospital. A new hospital tower will open in the coming weeks, culminating a long-term community initiative to invest in state-of-the-art health care.

The Campaign for Children’s of Mississippi has raised more than 83 percent of its $100 million goal so far.

“Gifts such as this generous donation from Regions Bank allow Children’s of Mississippi to offer world-class care close to home,” said Dr. Mary Taylor, Suzan B. Thames Chair, professor and chair of Pediatrics at UMMC. “The advances in the Sanderson Tower will transform children’s health care in Mississippi, and we are so excited to see this state-of-the-art facility open next month.” 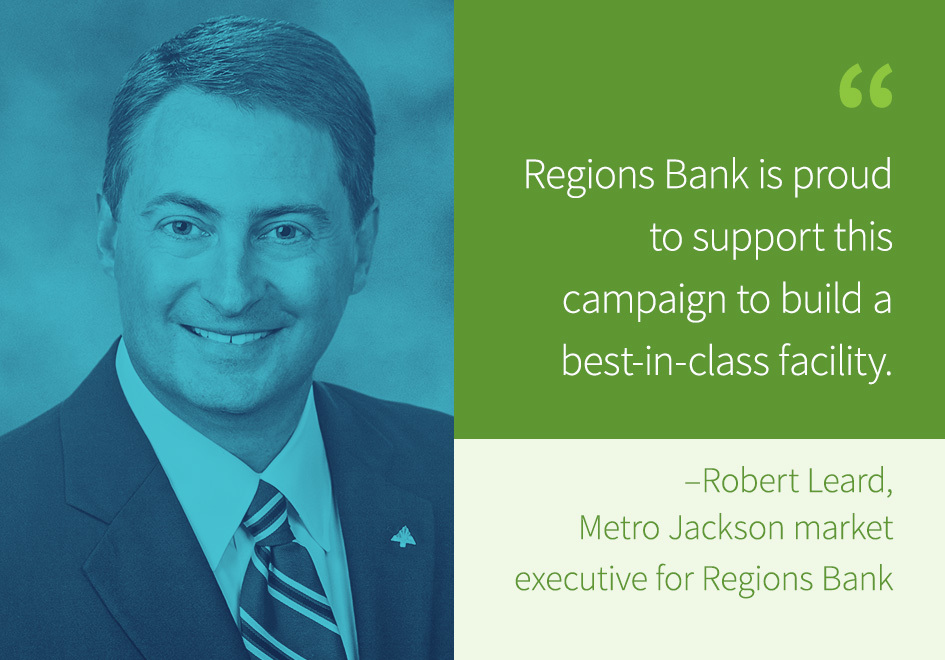 Children’s of Mississippi is the pediatric arm of UMMC that includes the state’s only children’s hospital as well as specialty clinics around the state.

The Sanderson Tower and the Blair E. Batson Tower, opened in 1997 and named for UMMC’s first chair of Pediatrics, together form the children’s hospital. The expansion tower includes 88 private neonatal intensive care rooms where parents can stay with their babies as they grow healthier, 32 private pediatric intensive care rooms, a dozen advanced surgical suites, an imaging center designed for children and an outpatient specialty clinic for follow-up care.

Sanderson Farms CEO and board chairman Joe Sanderson Jr., who chairs the Campaign for Children’s of Mississippi with wife, Kathy, thanked Regions leaders for the bank’s commitment to the state’s children and families.

“Regions is a strong ally in support of this important expansion of children’s medical care,” Sanderson said. “We are grateful for their generosity and dedication to the children and families of Mississippi, and we hope that others in Mississippi’s business community will join with Regions to support this critical project for our state.”

Dr. LouAnn Woodward, vice chancellor for health affairs and dean of the School of Medicine, thanked Regions for their continued support of the Medical Center’s mission.

“We’re thankful to have Regions as a partner in advancing health care,” she said. “They have consistently supported the health of Mississippians through their donations to UMMC.”

Before this latest grant, Regions Bank in April announced it would match donations to COVID-19 relief efforts at UMMC by up to $50,000. The matching gift total was reached within weeks.

Further, each year, the bank funds the Regions Bank TEACH Prize, celebrating the Medical Center’s faculty. An acronym for Toward Educational Advancement in Care and Health, the TEACH Prize includes a cash award of $10,000. The award was initiated in 2013 and honors faculty who engage and inspire students through innovative teaching methods.

“Regions Bank’s commitment to community engagement is impacting families across Mississippi,” said Owen King, Regions’ Brookhaven branch manager. “You don’t have to look far to find people whose lives have been touched by the physicians and staff here at UMMC. I’ve experienced this personally as UMMC has provided loving care to my daughter as she battles cancer. The donation Regions is proud to announce today is to help ensure more patients and more families will have access to quality care, here at home, in the years to come.”

About Regions Financial Corporation
Regions Financial Corporation (NYSE:RF), with $145 billion in assets, is a member of the S&P 500 Index and is one of the nation’s largest full-service providers of consumer and commercial banking, wealth management, and mortgage products and services. Regions serves customers across the South, Midwest and Texas, and through its subsidiary, Regions Bank, operates approximately 1,400 banking offices and 2,000 ATMs. Regions Bank is an Equal Housing Lender and Member FDIC. Additional information about Regions and its full line of products and services can be found at www.regions.com.