BIRMINGHAM, Ala. – Aug. 29, 2019 – As fans and players get ready for the start of college football this year, Regions Bank – the Official Bank of the Southeastern Conference (SEC) – is recognizing something that can sometimes get lost in the touchdowns, sacks, or any personal or team achievement: the commitment, the discipline and the day-in, day-out work that leads to improvement and growth.

And who better to remind both players and fans to keep working and putting in the needed effort than Strength and Conditioning Coach Scott Cochran?

In a new series of commercials called “Greatness in the Grind,” the fiery coach moves from encouraging players to helping everyday people do their financial best … with a little help from Head Coach Nick Saban.

The new Regions Bank series will debut the opening weekend of the 2019 college football season.

“Every day, people are doing the little things to reach their financial goals,” said Michele Elrod, Regions’ head of Corporate Marketing. “Whether you are a student, an athlete or someone managing your money to get where you want to go in life, we know it takes hard work and focus. It’s important to recognize the effort that goes into achieving anything.”

Regions has been a sponsor of the SEC for more than 25 years, as well as recently being named the official sponsor of the AP Top 25 weekly college football poll.

During the coming football season, Regions will also be a regular part of the Saturday kickoff show, SEC Nation, with scheduled on-campus stops each week. The first two are scheduled for the Aug. 31 Georgia at Vanderbilt game in Nashville and the Sept. 7 West Virginia at Missouri game in Columbia.

At each tour stop, Regions will be on site for pregame tailgates and fun with swag giveaways, photo opportunities and games. Oh, and Regions’ iconic big green bike will also be there. 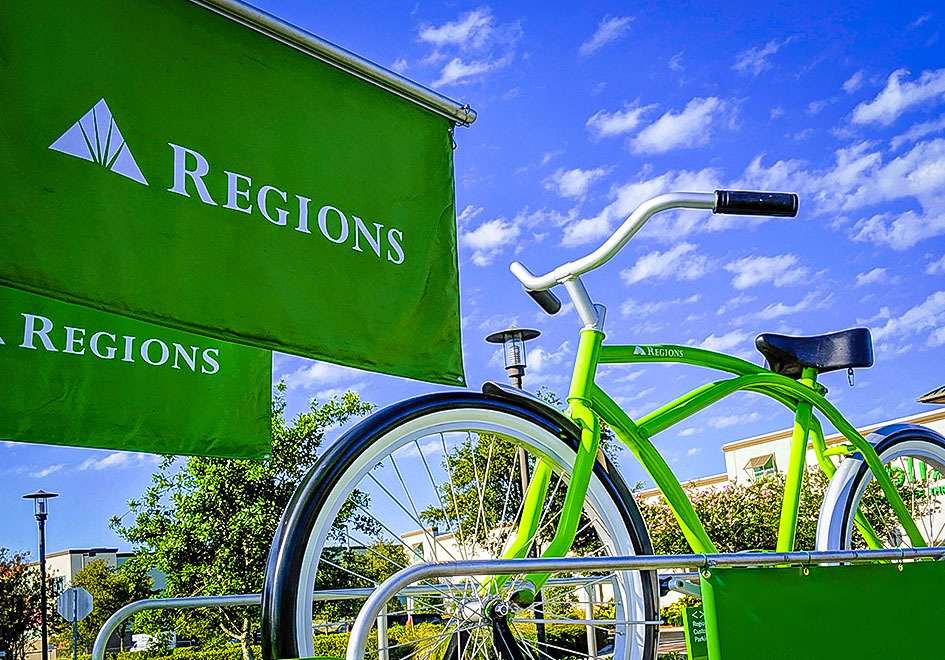 In addition, at each stop, fans will have an opportunity to register for the Regions Bank #road2ATLsweepstakes Promotion for a chance to win a SEC Championship prize pack that includes four tickets to the SEC Championship, hotel accommodations, a VISA gift card and VIP behind-the-scenes access to the SEC Nation broadcast. No purchase or banking relationship is necessary to enter; visit road2atlsweepstakes.com for registration details and official rules.

Lastly, fans can also be a part of ESPN’s celebration of the College Football 150 Initiative, through a new SEC Storied series on the SEC Network. “Saturdays in the South,” an eight-part series highlighting the history, passion, and stories of college football in the South, will air weekly beginning Sept. 3, with Regions as the presenting sponsor. Episodes will also be available to stream on demand on the ESPN app, accessible on computers, smartphones, tablets and connected devices for fans who receive their video subscription from an affiliated provider.

Get more information on SEC Nation stops this season.

About Regions Financial Corporation
Regions Financial Corporation (NYSE:RF), with $128 billion in assets, is a member of the S&P 500 Index and is one of the nation’s largest full-service providers of consumer and commercial banking, wealth management, and mortgage products and services. Regions serves customers across the South, Midwest and Texas, and through its subsidiary, Regions Bank, operates approximately 1,500 banking offices and 2,000 ATMs. Additional information about Regions and its full line of products and services can be found at www.regions.com.