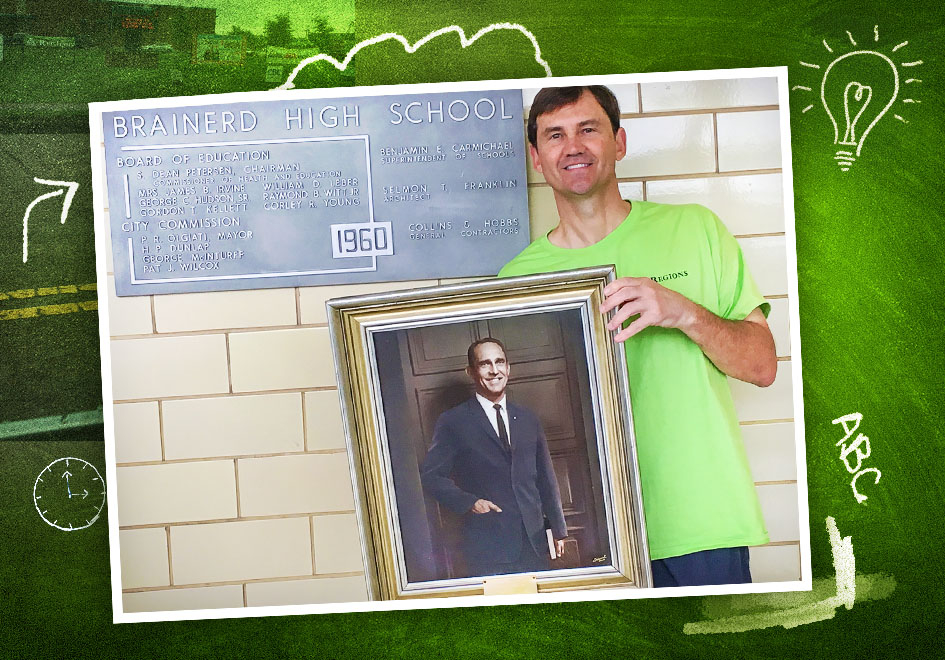 Chattanooga Market Executive for Regions, Michael Mathis, proudly displays a portrait of his grandfather and former Brainerd principal, Dr. George Mathis. During a tour of the school, Mathis saw this portrait hanging amid disrepair, and was spurred to action.

“My mouth was wide open in disbelief.”

Touring the halls of Brainerd High School in Chattanooga, Michael Mathis couldn’t believe his eyes. Peeling paint. No working water stations in the science lab. Blackboards with exposed brick behind them.

It would’ve been difficult for anyone to observe what deferred maintenance over several decades now resembled at Brainerd. Especially so for Mathis.

His late grandfather, Dr. George Mathis, was Brainerd’s principal when the school opened in 1960. During his inaugural student address, Dr. Mathis said, “Brainerd Senior High must reflect the best efforts of our faculty, parents, pupils and community if we are to be successful.”

Fittingly, Dr. Mathis’ words from 1960 were part of the first message current Brainerd principal Chris James delivered to students when he arrived in 2018.

“We are focused on reclaiming the potential we see at Brainerd – not only in our building, but also in our students,” said James. “Dr. Mathis’s message is one that is still relevant today as we strive to restore the school’s former glory.” Brainerd was a vibrant, progressive school in a growing part of Chattanooga when it opened its doors. But time and decades of wear-and-tear have taken their toll. Today’s Brainerd needed some serious renovation help to restore its best reflection.

That’s where a group of dedicated volunteers and businesses from across Hamilton County – including Mathis and Regions – stepped in to lend their support.

“Our Brainerd Branch is right around the corner from the school, so it was a natural fit for us to make life better,” said Mathis, Chattanooga Market Executive for Regions. The bank provided financial and volunteer support for the Opportunity Zones project.

When Mathis chaired the 2018 Chattanooga United Way Campaign, he recruited local TV host, author and community advocate Alison Lebovitz to be part of his cabinet. When Lebovitz was tapped to help lead the Brainerd Together project, she sought out Mathis to be part of the effort. Why? Because she was confident they could repeat the success they achieved in shattering the United Way campaign goal and raising the largest amount of funding in the agency’s Chattanooga history.

“Michael is a leader who walks the talk,” said Lebovitz. “He leads by example. And he also has a great combination of personal principles and business acumen.”

Lebovitz was convinced she could get Mathis on board once he visited the school and saw the building’s decline. Her prediction was on point.

This is so much more than a painting project. This represents a clean slate and new hope for these students.
Alison Lebovitz, local TV host, author and community advocate

During the tour, Mathis was struck by his grandfather’s portrait staring back at him. “I kept thinking, ‘His lobby picture hangs proudly in a school of disrepair,’” said Mathis. “In that moment, I realized the need was so great. And I knew we needed to do something.”

Just as Lebovitz anticipated, Mathis’s concern was apparent during his visit. “When he toured, he asked thoughtful questions about the school’s enrollment, culture and needs,” said Lebovitz.

James observed a similar response from other business leaders when they visited the school and learned of the project. “The building has solid bones,” said James. “All it took was one tour and people saw its great potential.”

Mathis and Regions were the first to raise their hand to support the building restoration following his tour. Lebovitz credits the bank’s early commitment with establishing credibility around the project and motivating others to lend their support.

And did they ever lend their support. Corporate partners and community volunteers pitched in. “It takes the private and public sectors working together for everyone to thrive,” said Michael Mathis, Chattanooga Market Executive for Regions.

More than 250 volunteers signed up to tackle a variety of projects during a two-week stretch in June – a group of 40 Regions Consumer, Commercial, Private Wealth and Mortgage associates among them.

Lebovitz relates the volunteer interest to the “Stone Soup” parable, in which each person shares what they have to make something bountiful and beautiful for everyone to enjoy. In this instance, the soup’s ingredients included thousands of hours of time and talent. And both came highly valued.

“Your time is your life,” said Lebovitz. “Once you give it, you can’t get it back.”

Regions team members tackled interior painting and exterior brush clearing projects. Financial support provided by the bank covered the cost for two fresh coats of paint in each of the 24 rooms. The difference from when Mathis toured the school in April to today? Transformational.

“Our community is coming together like never before,” said Mathis. “It takes the private and public sectors working together for everyone to thrive.”

Mathis appreciates the involvement of his Regions teammates. “I was really grateful to everyone for helping with the project, and it especially meant a lot that our branch team stepped up to lend their support during the weekend.”

Barbara Turner-Chappell, manager of the Brainerd branch, notes big changes aren’t always required to create a big difference. “It’s the small things that you and I can do today that will mean everything to these students tomorrow,” said Turner-Chappell.

Lebovitz agreed. “This is so much more than a painting project,” she said. “This represents a clean slate and new hope for these students.” James believes the support demonstrated by corporate partners and community volunteers also offers a positive example to the students about the impact achieved when people come together to support a common goal.

“This project was a heavy boulder to lift,” said James. “I’ve just been mesmerized by the community response we received. We want the students to see the significant changes to make the building bright and friendly. It’s now an environment that breeds creative thinking.”

Regions’ ongoing partnership with the school includes two projects already in the planning phase. The bank will collect school supplies to donate as part of its Share the Good Week. And Brainerd branch associates will teach six Junior Achievement Careers for Success sessions to school freshmen in the fall. More than 250 volunteers – including 40 Regions associates – tackled a variety of restoration projects.

Lebovitz and the Brainerd Together team are planning a community celebration where they will reveal the new, improved aesthetics to the public Aug. 4 before students return to the classroom three days later. Mathis will be there.

No doubt he will reflect on the legacy of his grandfather, a man who also led by example and encouraged him to continually pursue his education.

“Being part of this project makes me feel especially good,” said Mathis. “When I see his photo displayed in the lobby, I’ll know how proud he would be.”