Ready for the Game of the Season?

In the latest AP Top 25 presented by Regions Bank, Tennessee climbed into a tie for No. 2 with Ohio State, setting up an epic No. 1 vs. No. 2 showdown this Saturday between top-ranked Georgia and the Volunteers. It’s the third such 1 vs. 2. SEC matchup in the last dozen seasons. 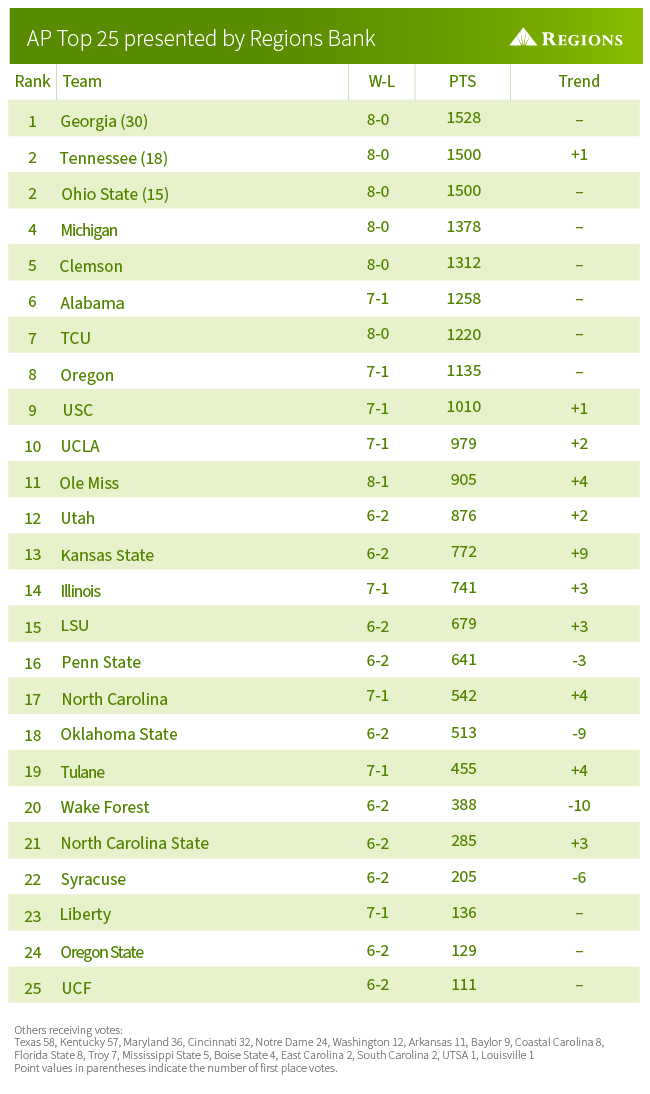 Georgia-Tennessee will be the 25th regular-season game matching the top two teams in the AP poll, and the third straight involving Southeastern Conference teams. Neither the Bulldogs nor the Volunteers have ever played in a 1-2 game in the regular season.

Georgia remained No. 1 for the fourth straight week, receiving 30 first-place votes and 1,528 points in the AP Top 25 presented by Regions Bank.

The Volunteers moved up a spot, receiving 18 first-place votes and 1,500 points to match Ohio State. The Buckeyes received 15 first-place votes. The last time there was a tie at No. 2 in the AP poll was Nov. 14, 2004, between Auburn and Oklahoma behind No. 1 Southern California.

Tennessee has not been ranked this high since it was No. 2 in 2001, a season the Vols finished fourth.

The last time both Los Angeles schools were in the top 10 was September 2015.

The first College Football Playoff rankings of the season will be released Tuesday night.

The last two 1-2 regular-season games both involved Alabama and LSU.

The Tigers were No. 1 in 2019 when they beat the second-ranked Crimson Tide in Tuscaloosa, Alabama, on the way to an SEC and national championship.

In 2011, the top-ranked Tigers won at No. 2 Alabama in overtime and the two SEC West rivals played again in the BCS national championship game. The Tide won the rematch and finished No. 1.

Including postseason games, this will be the 53rd game matching AP’s No. 1 and No. 2 since the poll began in 1936.

Three teams are making their season debuts on the Top 25 this week.

Earlier this year Kansas broke a 13-year rankings drought, which had been the longest in Power Five. Then Illinois broke the next longest dry spell, moving into the rankings for the first time since 2011.

Rutgers currently holds the longest AP Top 25 drought among Power Five teams, dating back to 2012. Vanderbilt is next. The Commodores have not been ranked since the 2013 season.

SEC East rivals Kentucky and South Carolina both dropped out of the poll after absorbing their third losses of the season. The Gamecocks are out after just one week ranked. The Wildcats are unranked for the first time this season.

Cincinnati also dropped out of the rankings after losing to UCF.

Big weekend in the SEC as both division leads will be up for grabs.

No. 20 Wake Forest at No. 21 North Carolina State. For the second straight year, the Demon Deacons and Wolfpack will meet as ranked opponents.