When Shellie Whitfield’s son takes an afternoon to mow the lawn, he knows his work won’t go unnoticed.

“I have 100 to 150 people taking photos of my house every day,” said Whitfield, the executive director of the Wetumpka Chamber of Commerce. “My son says in the time it takes him to cut the grass, 50 people take pictures of him.”

Whitfield lives in the Big Fish House, which gained notoriety as the set and setting for scenes in Tim Burton’s 2003 fantasy filmed in Alabama. But that’s not the reason for the latest rush of curiosity seekers.

No, it’s the fact that Wetumpka has gone from the big screen to the small. The subject of HGTV’s recent “Home Town Takeover” has made this small Central Alabama town on the banks of the Coosa River into a star of its own.

In a one-hour walking tour on a steamy Thursday morning, visitors stop Whitfield on the street for questions about where to go and what to see. Maybe it’s the name tag that draws the curiosity seekers. Or the fact that Whitfield seems to be showing others around and is open to new conversations.

In a short span, she meets a group of friends from up the road in Hoover, a couple from Atlanta who are returning from Nashville and wanted to make the detour. There’s a family from Knoxville, Tennessee. There’s a tour group from Mississippi. Church friends from Chattanooga.

These are just the daytrip “locals” whose interest is piqued by “Home Town Takeover.”

She shows off a local bank, which has its real name on the front side of its sign and “1st National Bank,” which was the fictional setting in the Big Fish bank robbery scene, on the other. There’s a brand-new bookstore, just opened, where a barber shop used to be. With the help of HGTV stars Ben and Erin Napier, the interior has been reinvented, but the exterior still includes the barber pole and a bullet hole with a lore of its own.

At Coaches Corner, a restaurant that was part of the show’s makeover, the waiting line stretches a block even before it opens for lunch. 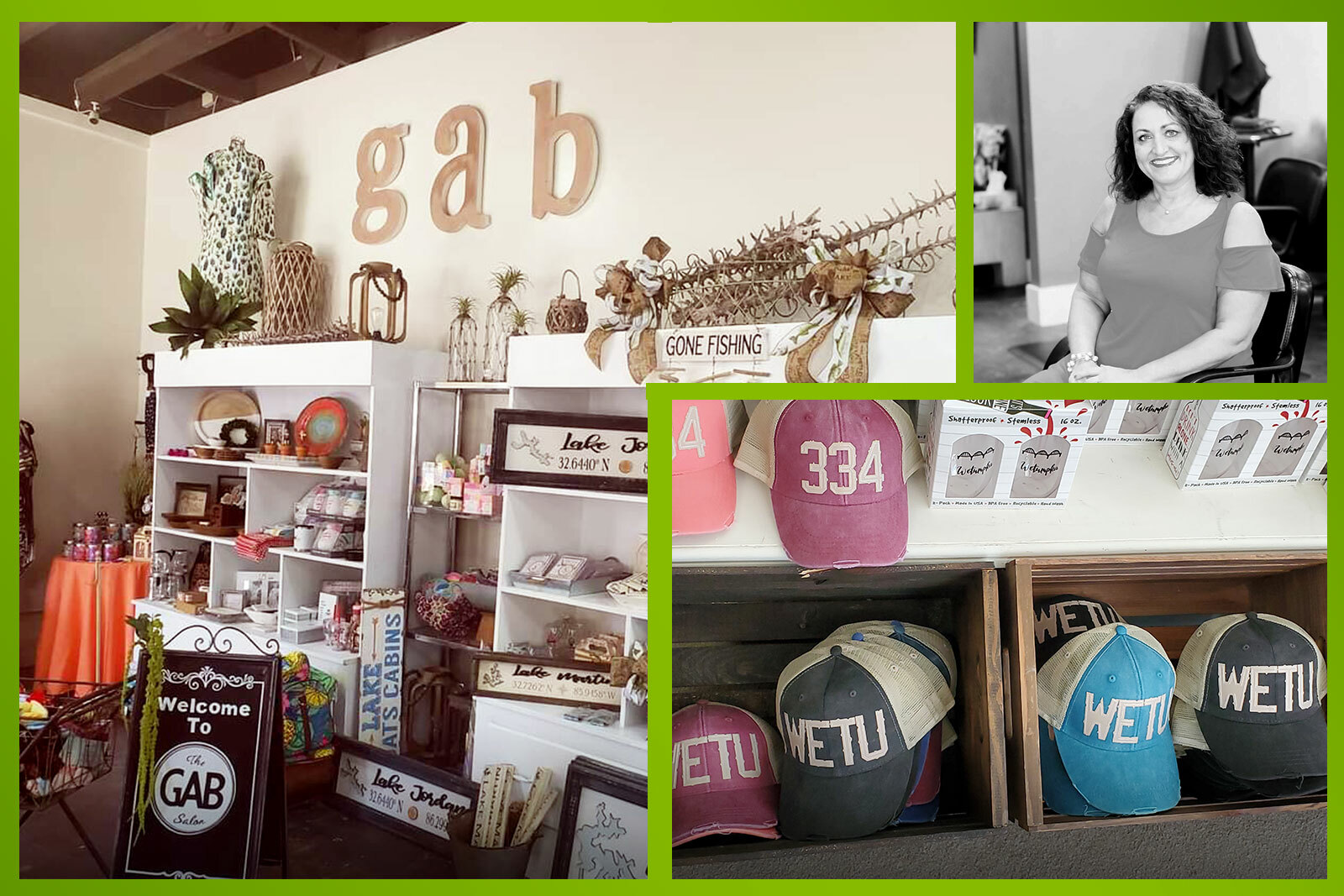 For townsfolk, the newfound celebrity is fun. In some regards, it comes as the light at the end of a dark tunnel.

Just two years ago, part of Wetumpka was destroyed by an EF-2 tornado. That delayed ongoing civic improvement plans temporarily. But locals, including Regions Bank and the Regions Foundation, stepped up to help out.

“We lost 35 structures, the police station and multiple businesses,” Whitfield said. “Our Presbyterian minister lost both his church and his house. But people came together. That’s what people in Wetumpka do.

“But we went from the tornado to a year-long lockdown due to the pandemic,” she added. “Now people can get out and about, and they’re coming here to see what the fuss is about.”

In truth, “Home Town Takeover” merely highlighted work that’s been going on, including a downtown revitalization program and a landscaping effort from Main Street Wetumpka, which found an innovative way to support businesses during the lockdown.

Where there were once only a couple of local restaurants downtown there now seems to be one on every block. Retail space is nearly 100 percent booked. There’s a new butcher shop, farmers market, the iconic Main Street Tourist Trap container/souvenir stand and nearly a dozen art galleries within a short commute.

“Where Wetumpka was five years ago to where it is now is night and day,” said Rachel Padgett, manager of the local Regions Bank branch. “There are people walking around taking pictures at 8 a.m. Saturday morning. You can barely get in and out. But no one is complaining.”

Certainly not Paula Sargent. She was there before the show and before the storm. The Gab, her hair salon, was seeing a steady flow of business long before the town went prime time.

“What’s going on is mind blowing,” Sargent said. “I’ve been downtown 13 years, back when there was hardly anyone around. So, what we’re seeing now is crazy. And I’m loving it.”

Next door to her store is a boutique, the Yellow Daffodil. It got its start in the back of Sargent’s salon, grew enough to lease street-front space and is now serving as incubator for another budding business.

“I try to help everyone I can, whether it’s with business or advertising or fund raising,” Sargent said. “If you work for me, you’ve got to commit to doing volunteer service at least once a year. That’s a must.”

Sargent has seen her business grow, in part, thanks to the relationship with Regions.

“My husband and I go back to even before Regions was known as (predecessor) First Alabama,” Sargent said. “It’s all we’ve known. And we love Rachel. Anytime we need her – daytime, night or weekends – she’s available.” 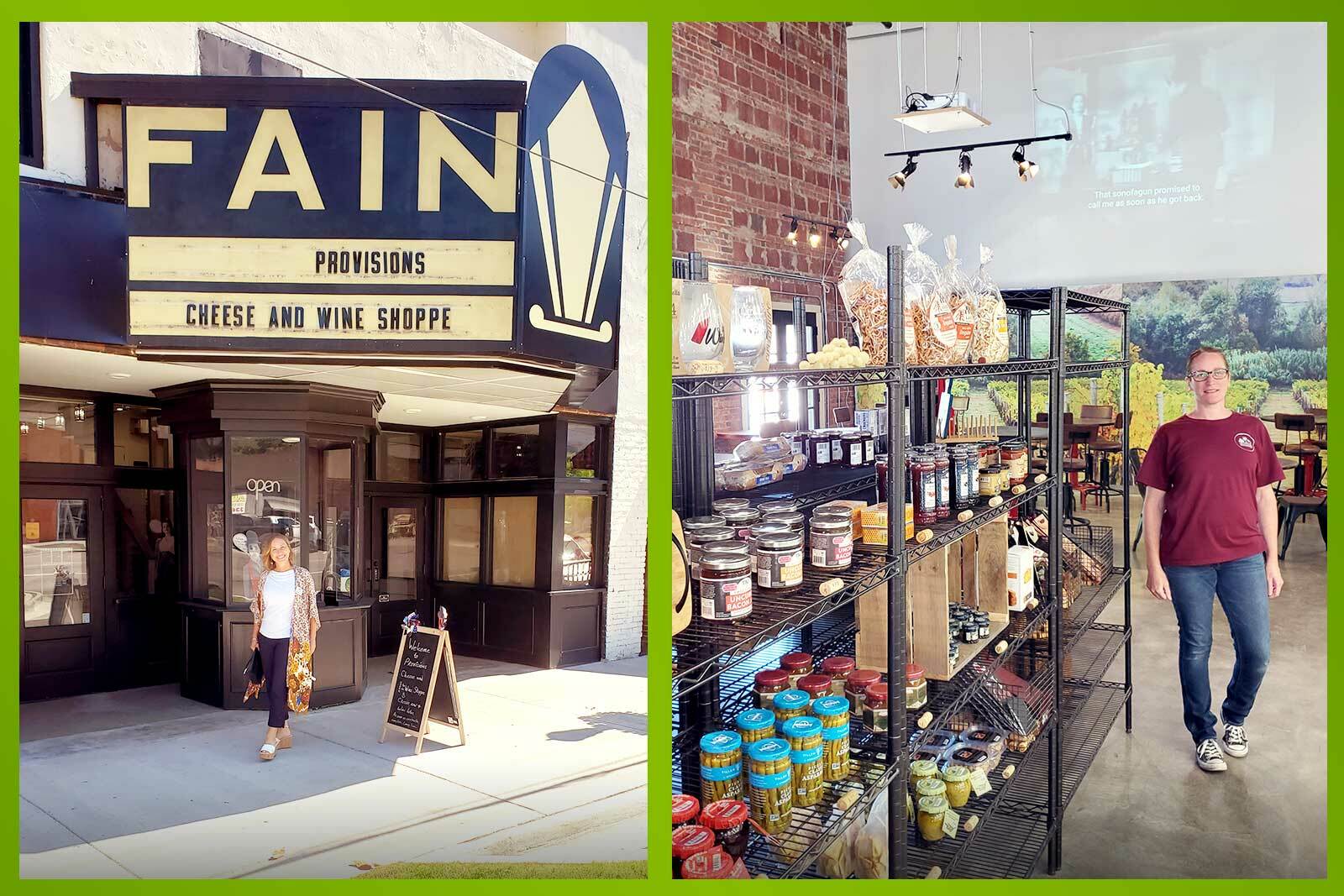 A block away, the old Fain Theater stood abandoned for years, with the roof falling in. The first redevelopment wave created luxury apartments overlooking the river. Then, last January, Kate and Lucky Lawrence moved in with their enterprise, Provisions Cheese and Wine Shoppe.

“We opened the 30th of January in the lobby in the middle of a global pandemic and wondered, ‘What have we done?’” Kate Lawrence said. “Now, the weather’s warmed up, the show has aired, and people are coming in to see what it’s all about. We’re so happy being here.”

The establishment offers selections any foodie would love – the wine is coming soon – as a classic film plays on the brick wall in the rear. For the Lawrences, who came to the area on military assignment for the U.S. Air Force, it was time to roll the dice.

“My husband walked into a cheese shop when we were stationed in Concord, Massachusetts in 2007 and said, ‘I want to open one of these,” she said. “This is a dream come true.”

Whitfield came here from Denver, looking for a simpler life, a slower pace and good schools for her sons. She fell in love with the Big Fish House, which, at the time, was more of a curiosity in desperate need of repair.

Originally a one-level structure atop a bluff overlooking downtown, Tim Burton added a second floor as a movie set/soundstage for his film. But the upstairs was never finished, so the Whitfields could reinvent the edifice in their own vision. They did so for three grueling years. Then, along came Ben and Erin and “Home Town Takeover” to help them make it truly their own.

Thus, it’s been a whirlwind. Of rebirth and renovations. Of storms and surges of visitors. And, at times, a lack of privacy that bothers Shellie Whitfield nary a bit.

“I love it because this has helped our community beyond measure,” Whitfield said. “It’s benefiting our schools, our businesses and our entire communities. The ripple effect is profound.”

Consistency Really is Key in Business

When Small Businesses Thrive, so Do Their Communities

A Message of Thanks