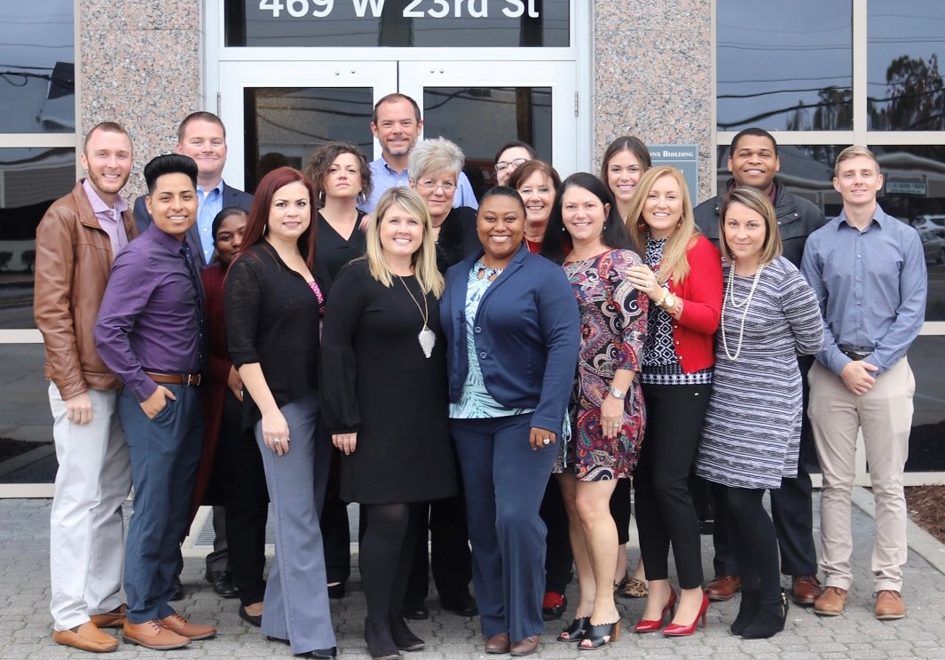 Regions associates at the Panama City Main branch gather for a group photo prior to the reopening of the branch for the first time since Hurricane Michael.

That was the sentiment Regions associates who work in the bank’s Panama City Main, Lynn Haven South and Callaway branches felt on the morning of Dec. 10, when the branches reopened following two months of repairs after Hurricane Michael made landfall along the Florida Panhandle as a category four storm.

For Lindsey Hall, branch manager at Panama City Main, the opening was especially emotional after experiencing the challenges of the last two months.

“Hurricane Michael was the most horrible experience I’ve ever lived through,” said Hall.

Hall was out on maternity leave when Michael hit, and her family was adjusting to their new life with a newborn.

Early on the morning of Oct. 10, Hall was feeding the baby when the news reports of the storm captured her attention. A native of the Panama City area, Hall had lived through many tropical storms and hurricanes. Like many people, Hall thought this late-in-the season storm would surely dissipate before making landfall.

The reports that morning, however, did not indicate the storm was weakening. In fact, Michael was strengthening with the Panama City area in its path. Hall awoke her husband to make a last-minute plan for their family.

With a new baby and two toddlers, ages five and two, evacuating wasn’t an easy process. With gas in short supply and roads congested with other evacuees, the family believed they would end up stranded on the Interstate as the storm was making landfall and decided it was too dangerous to leave. So, they chose to shelter in their home and hope for the best.

The Hall family huddled in a closet and tried to refocus their children’s attention away from the storm by playing games. Outside, they heard Michael’s fury. Winds topped 155 miles per hour, trees were snapped in half and uprooted, power went out, power poles fell, transponders blew, and neighborhoods were torn apart. When the family finally emerged from the closet after the threat had passed, what they saw was hard to believe.

“There was destruction everywhere. I thought we were the only ones in our neighborhood who stayed, but soon, I saw neighbor after neighbor coming out of their homes to survey the damage. It was our neighborhood, and in that moment, I was so thankful to see our community,” said Hall.

Connecting to her branch associates was all but impossible in the days and early weeks after the storm. Many cell towers were down, so finding places with signals was a challenge. Corporate colleagues at Regions’ headquarters in Birmingham, Ala., used emergency contact information for hundreds of bank associates to check on their safety and deliver emergency aid wherever it was needed, but for people like Hall, who were surrounded by devastation themselves, it was difficult not knowing how their friends and colleagues had fared.

“There was no communication,” said Hall. “We drove 45 minutes to an hour away just to find a spot where we could make and receive phone calls, check the internet and communicate with the outside world that we were safe.”

“Once I knew my family and friends were okay, I had to find out what was happening with my branch associates,” she added.

Hall wanted to make sure her associates were physically okay and that their basic needs were being met. She needed to know they had a place to stay and told them not to worry about work.

“Just get to a safe place, or find a place where you can just be,” Hall told her associates in a group text message.

The Regions family in Birmingham continued reaching out to offer help to associates. For many, Hall included, just being able to talk to someone about what was going on helped significantly in the recovery.

Regions offers an Associate Relief Fund to serve as a financial bridge for associates affected by disasters until insurance companies can issue payments. It’s not a loan. It’s a gift for people who are facing extremely difficult challenges. The fund itself is supported by Regions associates in more than a dozen states who contribute to support their colleagues.

Human resources personnel in Birmingham proactively connected with associates in the disaster area, and, in many cases, they were able to transfer money from the relief fund to associates’ bank accounts that same day. To date, the fund has provided more than $153,000 to 110 associates in areas heavily damaged by the storm.

“Having the Regions family is huge. It has been amazing to receive the extra help from Regions,” said Hall. On Hall’s first day back from maternity leave, her branch at Panama City Main reopened for the first time following repairs from Hurricane Michael. Tears flowed as she reflected on how good it felt to be back with her team during their morning “huddle.” It was hard to put into words all they had experienced over the last two months.

“I am so fortunate that we are all back together,” she said. “Everyone has worked through so much, working to serve our customers while dealing with their own hurricane damage at home. This is normal, and it feels so good to be back doing things not associated with the hurricane.”

John O’Mera, Regions’ Consumer Banking Manager in Panama City, thanked Hall, retail operations manager Laura Ray, Callaway branch manager Andrew Nicol and Lynn Haven branch manager Kirsten Summers – and each of their local teams – for all their work to get the branches back open and ready to welcome customers.

“Our Regions team always goes the extra mile to serve customers and meet their financial needs,” O’Mera said. “The fact that associates went above and beyond while also experiencing personal losses after Hurricane Michael is a testament to the quality of people we have. Lindsey, Andrew and Kirsten provided strong leadership to their branch associates at Panama City Main, Callaway and Lynn Haven and were instrumental in getting everything ready for opening day. Regions is proud to have all Bay County branch associates back home just in time for the holidays.”