The landscape of Iowa’s Cedar Valley is a tapestry of farmland, a place where colorful barn quilts add to the character of the landscape and silos stand tall against endless rows of cornstalks. It’s a familiar scene throughout Iowa, a state that produces more corn, hogs and eggs than any other.

More than 97 percent of farms here are owned by families. Some in the rural outskirts of Waterloo and Cedar Falls, which make up much of the Cedar Valley region, have been in the same family for generations. It’s a place Iowans find hard to leave. And if they do, they dream of coming back.

Kara Grupp was perfectly content working in a laboratory at Iowa State University, about an hour-and-a-half away in Ames, when she was struck with an opportunity to change course. The couple working her family’s farm in Cedar Falls — for nearly 50 years — announced they were moving into town. She decided to drop everything and move to the farmhouse herself.

“This is probably the only thing that could have taken me away from that other life,” she says, standing in the red wooden barn her great-great-grandfather built. “I still love science, and it was cool research I was doing. But I’ve always wanted to be on a farm. It just never occurred to me it would be this one.”

Three Pines Farm has been in Grupp’s family since 1856, and while others still farm their land, Grupp has put a new spin on the concept of farm life. Grupp renovated and turned the brick barn her grandfather built into a studio that hosts classes and specialty events centered on the arts, cooking, traditional crafts and sustainable living.

“I want to bridge the knowledge gap with things our grandparents did in their daily lives – to connect people with more mindful, inspired, creative and slower ways of living,” she says. Among her offerings is a class called “Home Dairying: Heirloom Yogurts,” as well as a weekend basket-weaving retreat.

“It’s really about building relationships and bringing a little joy out into the world,” she says. “That is my hope, anyway.”

But her baby goats garner most of the attention. They wander freely around the barn pouncing on tabletops and nibbling at shoelaces during the popular Goat Cuddlefests – and they balance on participants’ backs during Goat Yoga classes. “They love the attention,” Grupp says. “It’s much more intimate than a petting zoo. It’s like visiting Aunt Kara and seeing her goats.”

The sound of bleating goats is replaced at Hansen’s Dairy by mooing cows and the thumping of … kangaroo feet.

“Yeah, that’s right. We have kangaroos,” says Jordan Hansen, part of the seventh generation to work on the farm and creamery in Hudson, just 15 minutes from downtown Waterloo. Hansen’s Dairy is designated as an Iowa Heritage Farm, meaning it has been owned by the same family for more than 150 years. Its sustainability can be credited to the family’s careful – and creative – business practices.

In the early 2000s, the four grown sons of Jay and Jeanne Hansen – the sixth generation –  wanted to return to work on the dairy farm. To support four additional families, they established an on-farm creamery where they produce milk, butter, cheese curds and ice cream, which are all distributed throughout the area.

Soon after the creamery opened, the tours began. “It wasn’t something we set out to do,” says Hansen, who handles marketing for the dairy and schedules tours. “It just grew out of the fact that people wanted to come and see where food is made. That’s pretty special.”

About 6,000 people tour the farm from April through October. Guests visit the barns, bottle-feed calves and watch the Holsteins being milked.

The kangaroos came in 2012 after Hansen’s husband, Blake, visited Australia and fell in love with the marsupials. He suggested raising some on their land and making a kangaroo the mascot for their dairy products. Since the kangaroos are domesticated, visitors are allowed to pet and feed them. The kangaroos turned into an unexpected hit.

“It’s been great publicity for us,” she says as she dodges phone calls from people requesting tours. Her phone rings constantly, and she admits it’s a good problem to have. “I have to explain to people that we are not a kangaroo farm. We are a dairy farm that just happens to have kangaroos.”

At the end of the day, what’s most important is that people learn how a dairy farm works and see how their food is made, she says.

“We’ve been really blessed to be able to live out our dream.”

With farmland so vast here, it may be hard for a visitor to imagine there is much else to see. But after a short drive toward town, one stumbles upon the Waterloo-Cedar Falls metropolitan district, featuring two thriving downtown arts, entertainment and recreation areas that prove there’s more to the Cedar Valley than initially meets the eye.

In downtown Waterloo, fried pork tenderloin sandwiches at Newton’s Cafe are attention-grabbing. “You’ve never seen anything like this,” says Kaitlyn (Kat) Peters, balancing the masterpiece sandwich on a platter.

She’s not kidding. Newton’s takes a full pork tenderloin, roll-cuts it and pounds it into a footlong rectangle, coats it in breading, deep fries it to a golden brown, and then serves it on a comparatively small hamburger bun with lettuce, tomatoes and onion ringlets. It’s ridiculously big.

Newton’s isn’t the only restaurant in Iowa to serve up fried tenderloin (though it may be the only to do so with such girth). The schnitzel-like sandwiches are a “thing” in Iowa, and rightly so.

The tenderloin sandwiches have become so popular that the Iowa Pork Producers Association put together the Iowa Tenderloin Trail. Former Iowans and out-of-towners alike visit the downtown restaurant year-after-year for their regular fix, Peters says.

Newton’s opened in 2014, and is an example of the growth that’s been revitalizing downtown Waterloo over the past two decades.

The challenge came from John Deere, the city’s largest employer, which called on community leaders to improve recreation, education and housing to help attract and keep its workforce. As a result, downtown Waterloo, which straddles the Cedar River, has several event venues including the RiverLoop Amphitheatre, Young Arena and the Waterloo Center for the Arts. Most weekends are packed with concerts, festivals and sporting events that draw crowds from miles around.

Waterloo also has its fair share of museums, including the Grout Museum of History and Science, the Sullivan Brothers Iowa Veterans Museum, the Carl A. and Peggy J. Bluedorn Science Imaginarium, the National Wrestling Hall of Fame Dan Gable Museum and the John Deere Tractor & Engine Museum, which showcases the century-long evolution of the green and yellow tractors built in Waterloo.

Waterloo shares a metropolitan area with Cedar Falls, a city most known as home to the University of Northern Iowa. But Cedar Falls’ downtown has become a vibrant entertainment area comprised of eclectic restaurants, bars and shops, as well as the historic Black Hawk Hotel, which proudly bills itself as the oldest operating hotel in the country. Flower beds and public art line the Main Street.

Downtown sits adjacent to the Cedar River, where construction is underway for another hotel, as well as a waterfront plaza. Nearby, a new residential building is taking shape.

“We’re seeing a period of pretty dramatic growth in the downtown area,” says Carol Lilly, executive director of Cedar Falls Community Main Street. And it’s been carefully and methodically thought out. “I think it speaks to the good relationships we have with our community partners. We work together to ensure success.”

“A lot of people don’t think about visiting the Midwest, but I suggest they give it a try,” she says. “It’s just a really great place to visit.” 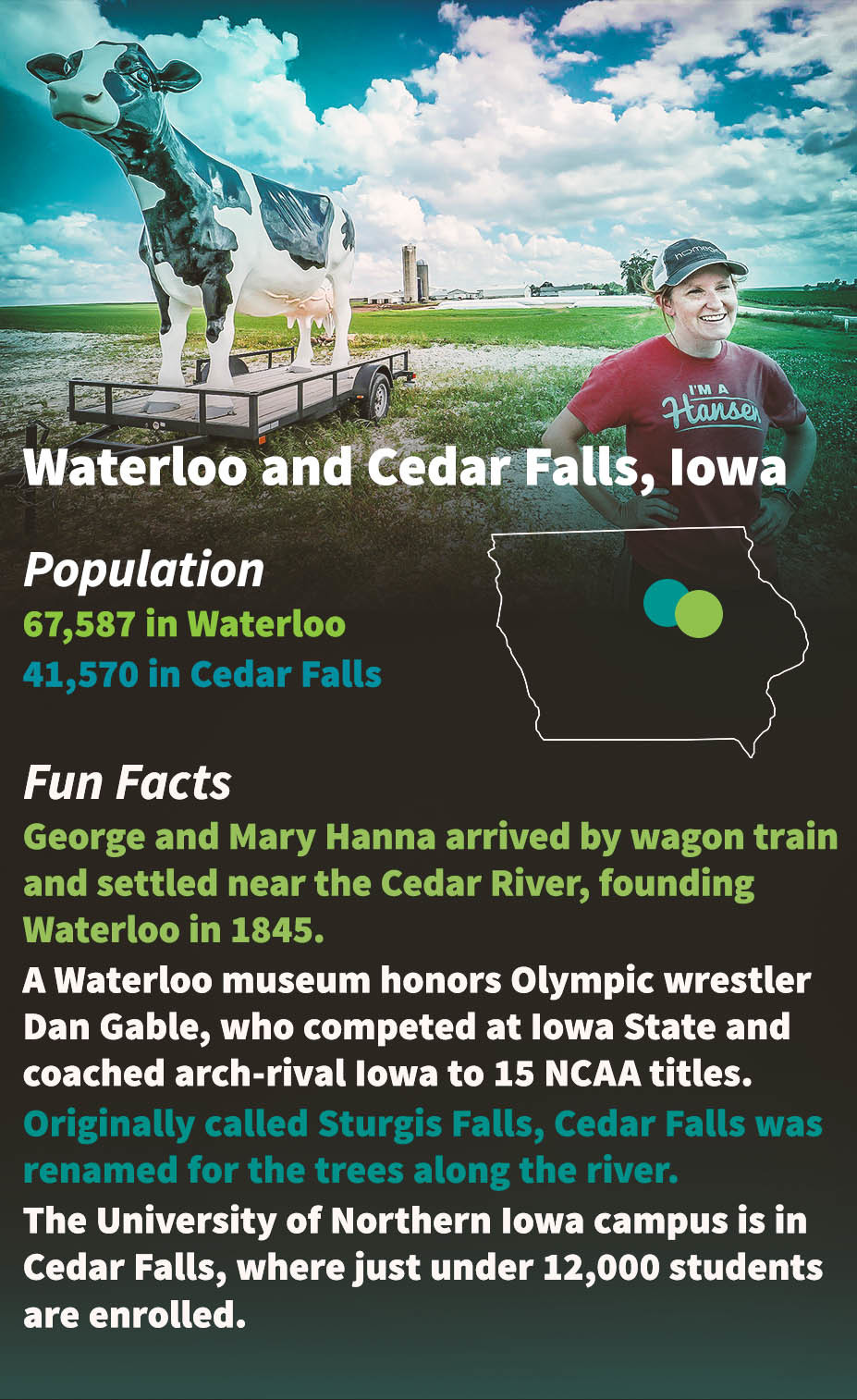