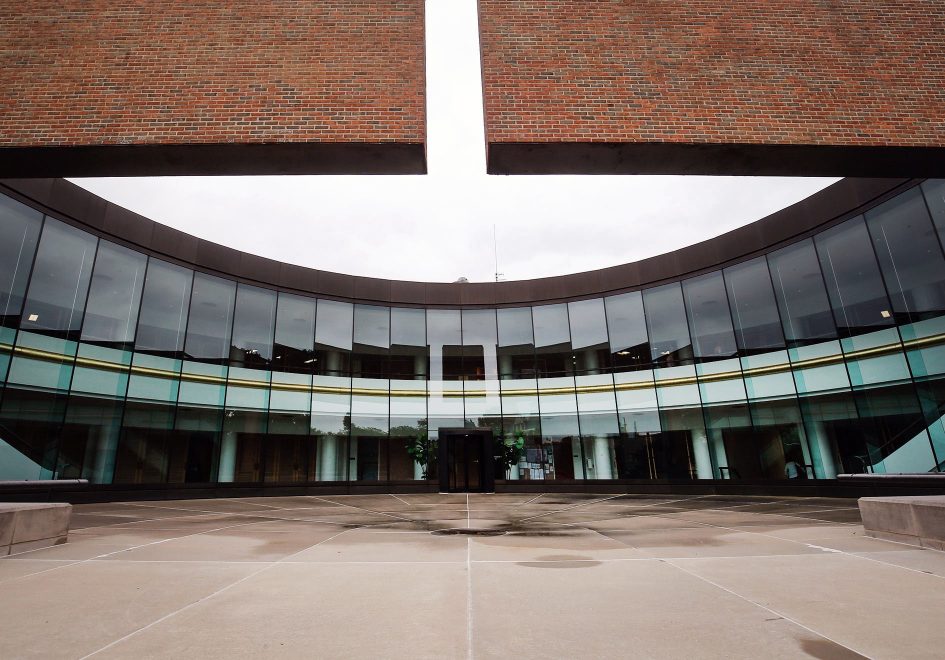 Most people who visit Columbus, Indiana, don’t know what they’ve stumbled upon. At best, they may find its people delightfully diverse; the public art displays large and curious; and many of the buildings strangely out of the ordinary.

But to those with a trained eye, this midwestern city is remarkable, a mecca of mid-century modern architecture that no other town its size can boast. T. Kelly Wilson had heard about Columbus as an architecture student nearly 30 years ago. But nothing prepared him for what he’d find once he got here.

A Harvard-trained Master of Architecture, Wilson was living in New York City when he was contacted by a former colleague about heading up and building upon the Center for Art and Design in Columbus, part of the School of Art, Architecture + Design at Indiana University in Bloomington.

The minute Wilson set foot in Columbus, he realized he had walked into something remarkable – more so than what he remembered as a student. “I was so blown backwards by the architecture,” he says. It was as if Wilson were a kid set free in a candy store. His eyes could hardly take in the magnitude of what he was seeing. The Kevin Roche and John Dinkeloo-designed post office. The former bank building by Eero Saarinen. The gigantic Henry Moore sculpture in a significant open plaza outside the library I.M. Pei designed. Henry Moore created the Large Arch that sits in the plaza of the Cleo Rogers Memorial Library. Last spring, after a seven-year effort by Wilson and a half-million-dollar pledge by IU President Michael A. McRobbie and his wife to endow a professor of modern architecture, the university announced a new Master of Architecture (M-Arch) program based in Columbus to build off the IU Center for Art and Design. The first classes were held this fall in the Republic building, one of Columbus’ many National Historic Landmarks.

The program is named in honor of J. Irwin Miller, a Columbus native and the industrialist with the “radical vision” that turned his hometown into an architectural wonderland.

The artistic appeal of Columbus that has marked this community for more than a half century didn’t happen by chance. It was the plan of local businessman J. Irwin Miller to make the midsized city more appealing not just for those who live here, but to prospective employees of Cummins Engine Co. (now Cummins Inc.), the Columbus-based Fortune 500 company where Miller served as president from 1947 to 1951, and chairman from 1951 to 1977.

In 1954, Miller established the Cummins Foundation with the goal of covering the cost of all architect fees for new public buildings in Columbus, provided they use an architect approved by the Foundation. Interest was infectious. Left: Built in 1942, the First Christian Church set the tone for contemporary design across the U.S. Right: With its hexagonal design, North Christian Church is a favorite of architects around the world.

Some of the architects who have since designed buildings here include:

More than 60 buildings in Columbus have been built by now-renowned architects, six of those buildings are also National Historic Landmarks. In 1991, the American Institute of Architects rated Columbus sixth on its list of the top 10 American cities for architectural quality and innovation. Columbus holds the honor with architectural giants like New York, Chicago and San Francisco. Artist Dessa Kirk’s Eos was so popular that the community raised funds to find it a permanent home in Columbus. Dedicated in 1971, the Cleo Rogers Memorial Library was named for a longtime county librarian.

But the buildings are just part of the appeal. Rising up from corners at busy downtown intersections and outside storefronts throughout town are large displays of public art, including Dessa Kirk’s Eros statue at the 5th Street median, originally part of the 2006 Sculpture Invitational that became so popular the city raised money to ensure her permanent home here; the 30-foot, 7-ton kinetic Chaos I sculpture by Swiss artist Jean Tinguely, located in The Commons building downtown; and the nine-foot Dale Chihuly Yellow Neon Chandelier with 900 hand-blown elements in variations of vibrant yellow that hangs in the Columbus Area Visitors Center.

Nestled within these modernistic buildings and pieces of art are a variety of colorful pedestrian paths and gardens like the Alley Walkway Project on the 400-600 blocks downtown and the Italianate gardens at The Inn at Irwin Gardens, the circa-1894 family home of businessman Joseph Irwin (J. Irwin Miller’s grandfather).

Steps from downtown is Race Mill Park, an 85-acre riverfront refuge designed by Michael Van Valkenburgh with structures by architect Stanley Saitowitz including an 84-foot observation tower, a covered bridge and pavilions. A one-ton Skopos sculpture created by local artist Rick Bauer sits along the riverbank. The Skopos sculpture, created by local artist Rick Bauer, sits along the riverbank.

The Miller House and Gardens is a masterful intersection of architecture, design and landscape talent. In 1953, J. Irwin and his wife, Xenia Simmons Miller, commissioned Eero Saarinen to create a year-round home where they could entertain heads of state and industry leaders. Saarinen’s principal design associate, Kevin Roche, worked on the project along with interior designer Alexander Girard and the landscape architect Dan Kiley. The home was declared a National Historic Landmark in 2000. Upon Xenia Millers’ death in 2008 (J. Irwin Miller died in 2004), the house was donated by the family to the Indianapolis Museum of Art. Guided tours start at the Columbus Area Visitors Center.

The City of Columbus seems to have taken every opportunity to showcase its visual appeal, from its two cable-stayed bridges welcoming visitors to the perfect placement of public works pipes against the exterior wall of a downtown shop. About 30,000 people each year pay to take part in one of the guided tours offered by the Visitor’s Center, such as the Architectural Highlights Bus Tour, the Miller House and Garden Tour, Inn at Irwin Gardens Tour, and Downtown Landmarks Walking Tour. Guided tours regularly fill to capacity so reservations are necessary.

Many people prefer to pick up a map from the Visitor’s Center or download one from the website and browse on their own. Most of the landmarks are within a two-mile radius and can be easily walked or biked to. (There’s a bike share program here, too.) Erin Hawkins of the Columbus Visitor’s Center at the Miller House and Gardens.

Most visitors to Columbus have heard of the city’s architectural bounty because they either are an architect or designer, or studied in those fields, says Erin Hawkins, Director of Marketing for the Visitor’s Center. “They often say Columbus has been on their bucket list. But I’ve been surprised by the number of people coming here lately because they saw the movie Columbus.”

She’s referring to the drama Columbus, written and directed by Kogonada, which earned rave reviews when it debuted at the 2017 Sundance Film Festival. The movie weaves many of the architectural landmarks of Columbus into its storyline. Columbus-the-movie tour maps are also available at the Visitor’s Center. From behind the counter of Zaharakos, William Hahn assembles an ice cream sundae.

Columbus architecture is a treat for the eyes, but downtown holds a similar appeal for the palate. The Savory Swine is a real-deal butcher shop that also sells wine, cheese, and charcuterie. Zaharakos Ice Cream Parlor and Museum is a favorite stop for a sundae, but its building is a remarkable preservation project. The museum has an astounding collection of pre-1900 memorabilia including marble soda fountains, old fashioned syrup dispensers, and restored orchestrions (a.k.a. music machines).

Reservations are probably a good idea for dinner at the cozy Italian Tre Bicchieri or the new American-style Henry Social Club. But for more casual eaters, Blackerby’s Hangar 5 is worth the drive to the Columbus Municipal Airport for the Airbus Breakfast, Mile High Club, or one of the Breakfast Combo “Flights.” The unique view from the interior of Blackersby’s includes the airport runway.