Alabama struggled in a prime-time showdown with Texas A&M, which was enough to cost the Crimson Tide its top ranking. Voters shook up the top, returning Georgia to No. 1 and moving Ohio State to No. 2 while Bama tumbled to third.

But the biggest story this week in the AP Top 25 presented by Regions Bank is the arrival of James Madison. In its first year of competition at the FBS level, the Dukes are now ranked even though they are ineligible for the Sun Belt Conference title, their new conference home, this season. 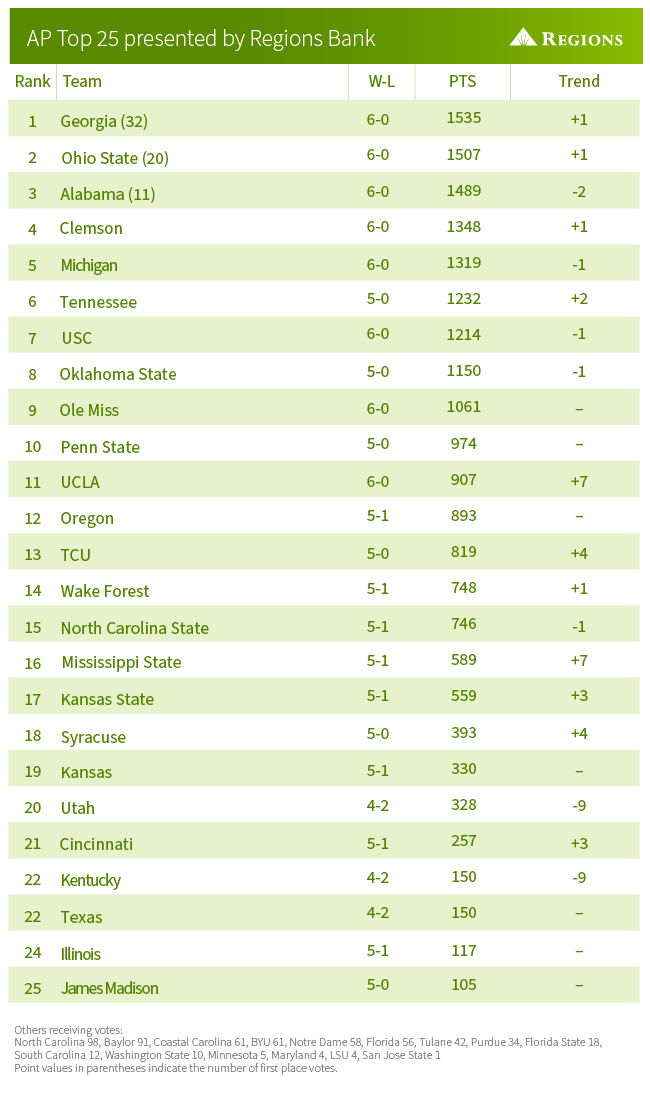 Georgia took back the No. 1 spot in The Associated Press college football poll from Alabama on Sunday after being bumped out last week by the Crimson Tide, who slid to No. 3.

The Bulldogs received 32 first-place votes and 1,535 points in the Top 25, presented by Regions Bank, to easily reclaim No. 1. They were just two points behind Alabama at No. 2 last week.

Georgia thumped Auburn 42-10 on Saturday. The Tide, whose Heisman Trophy-winning quarterback was sidelined by injury, escaped an upset bid at home by Texas A&M.

No. 3 is a season-low for Alabama, which was preseason No. 1 but fell to No. 2 after Week 2. The Tide received 11 first-place votes.

There were two notable season debuts in the Top 25: No. 24 Illinois is ranked for the first time since 2011 and James Madison is in the AP Top 25 for the first time in its program history. The Dukes are playing their first season as a member of the Sun Belt Conference in Division I college football’s highest level.

Clemson overtook Michigan and moved up to No. 4 and the Wolverines fell one spot to No. 5.

Tennessee moved up to No. 6, which is the best ranking for the currently undefeated Volunteers since No. 5 early in the 2005 season. Tennessee stumbled to a 5-6 and unranked finish that year.

Southern California fell one spot to No. 7, and Oklahoma State, Mississippi and Penn State held their places to round out the top 10.

The shuffle that Georgia’s made from No. 1 to 2 and back No. 1 over three polls hadn’t happened in more than a decade.

Florida went back and forth between Nos. 1 and 2 in 2009, flip-flopping with Alabama as both teams won in late October.

In
The week after Kansas handed the ignominious title of Power Five conference team with the longest streak of being unranked to Illinois, the Illini are now off the schneid in their second year under coach Bret Bielema.

James Madison has been a powerhouse in the Football Championship Subdivision for years, winning a national title in 2016 and losing to North Dakota State in the NCAA championship game in 2017 and ’19. The Dukes have had no issue moving up so far, going 5-0 and averaging 44 points per game.

JMU’s transition has been different than others, who take a year or two to acclimate before playing a full FBS-type schedule as they build up from 63 scholarship players to 85.

Aided by temporary changes to eligibility rules due to the pandemic, plus loosened transfer rules, the Dukes were able to dive right in with a more FBS-ready roster, coach Curt Cignetti told AP.

“There were a lot of unknows coming into the season,” Cignetti said. “The one thing about our program is we’ve had such great success from 2016 on … there’s a culture here, a standard, an expectation. And our guys expect to win every time we go out.”

Since Division I football split into subdivisions in 1978, JMU is the first team to be ranked in a season when it was transitioning up.

“All the national publicity that we have had is extremely positive for the university, the program, the athletic department and our boosters and supporters,” said Cignetti, the son of Hall of Fame coach Frank Cignetti, who died in September. “Making the Top 25, that’s just another step.”

No. 22 Texas is ranked again after blowing out rival Oklahoma and tied with Kentucky in the Top 25.

Conference Call
The Sun Belt went from its inception in 2001 to 2015 without having a ranked team. The conference has now had at least one team ranked for at least one week each of the last five seasons and six of the last seven.

James Madison is the second Sun Belt team to reach the Top 25 this season, along with Appalachian State.