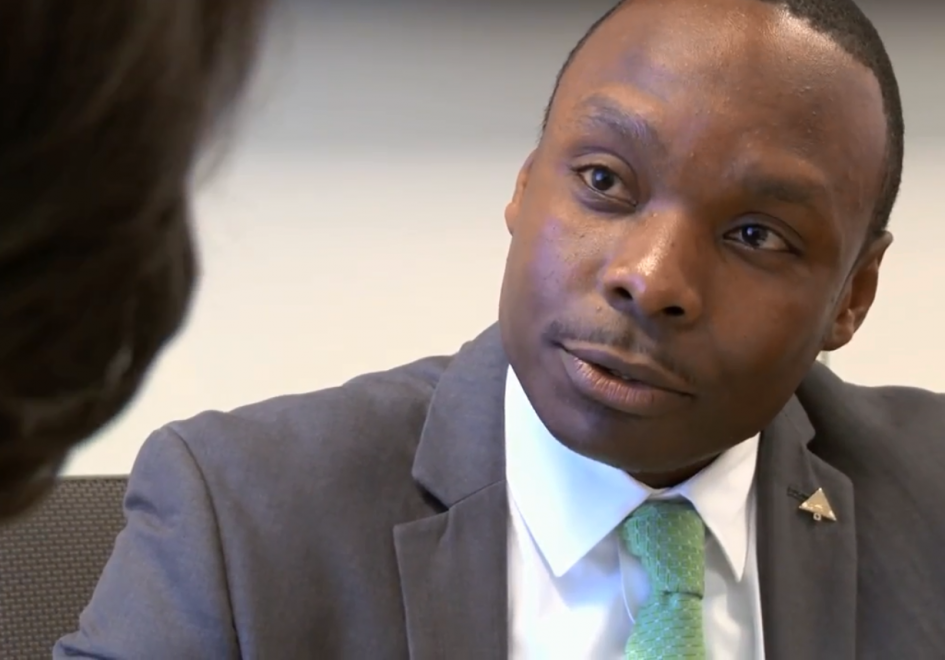 BIRMINGHAM, Ala. – Regions Bank today announced that Edward Lubembe, a branch manager in Bessemer, Alabama, is the February 2017 recipient of the Regions Bank Better Life Award. The Better Life Award is the top honor given to a Regions associate for outstanding dedication and job performance as well as exemplary involvement and commitment to the community.

Lubembe is a native of Kenya. While growing up in the African nation, he dreamed of becoming a bank teller. He also dreamed of coming to America.

“My father died when I was a young boy,” Lubembe said. “My mother knew that if we could make it to America, I would have a successful future.”

Lubembe and his mother moved to Alabama in 2003. In 2006, he realized his banking dream when he joined Regions Bank as a teller.

He exceeded that first goal, and today Lubembe uses his platform as branch manager to serve the needs of customers and community members in Bessemer and surrounding areas.

As a tribute to his mother’s dedication to give him a good life after losing his father, Lubembe serves on the board of Single Mothers Empowerment Conference, Inc., a Birmingham-based nonprofit organization that addresses the issues that impact single mothers and their children.

“I know the hard work it takes to raise successful children as a single mother,” Lubembe said. “This is one of the ways I can help.”

Lubembe is a member of the Bessemer Chamber of Commerce. He volunteers at his local YMCA Youth Center and teaches financial literacy classes at local businesses.

Now a U.S. citizen, Lubembe occasionally travels back to Kenya to encourage young people to strive for their goals. He also runs 40 miles every week and participates in several marathons each year. A video about Lubembe can be seen on the Regions Financial YouTube channel.

Regions associates are nominated for the award by their managers and peers. Regions Chairman, President and Chief Executive Officer Grayson Hall honors recipients at the company’s headquarters in Birmingham, Alabama, at a meeting broadcast to offices throughout the communities Regions serves. In addition to the recognition, associates who earn the Better Life Award receive an additional week of vacation, a crystal award, and a $1,000 donation is made in their name to the non-profit organization of their choice.

About Regions Financial Corporation
Regions Financial Corporation (NYSE:RF), with $126 billion in assets, is a member of the S&P 500 Index and is one of the nation’s largest full-service providers of consumer and commercial banking, wealth management, mortgage, and insurance products and services. Regions serves customers across the South, Midwest and Texas, and through its subsidiary, Regions Bank, operates approximately 1,500 banking offices and 1,900 ATMs. Additional information about Regions and its full line of products and services can be found at www.regions.com.