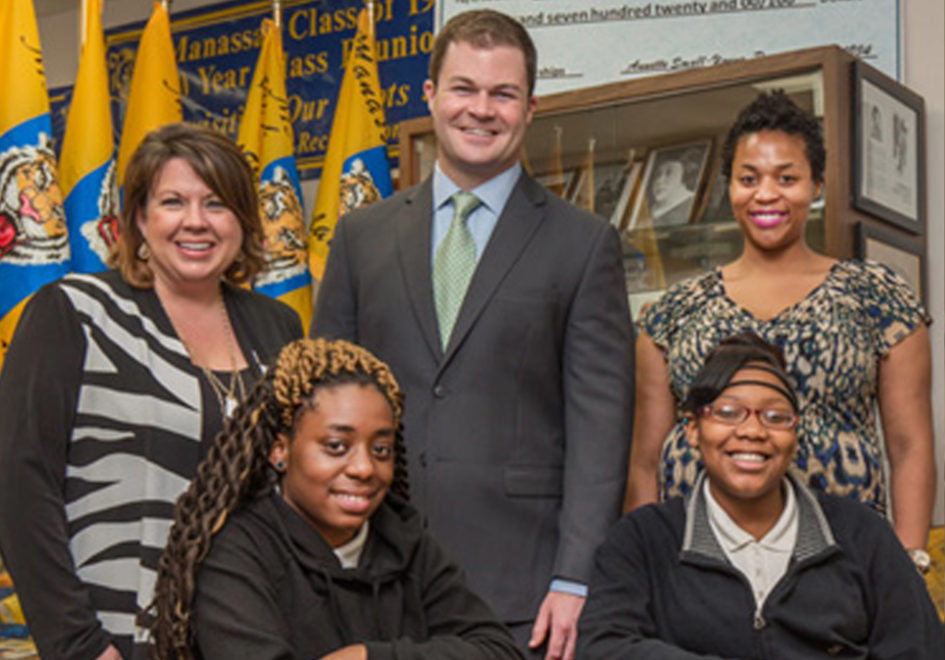 On a bright spring morning, Regions At Work coordinator Amy Cresswell drives through downtown Memphis. Today she’s not heading to an office. Instead she’s meeting with high school students just down the road at Manassas High School for the Regions Senior Institute program.

Manassas is one of more than 200 West Tennessee-area schools where Regions offers financial education programs, but for Cresswell, this school holds personal interest.

“Manassas is in my neighborhood,” she said. “If I had children, they would go here. But the average annual income level in this neighborhood is $10,000-15,000. If we can do a little bit to help the students move past the cycle of poverty and make better financial decisions, that’s something I’m proud to be a part of.”

Founded in 1899, Manassas is one of the city’s oldest high schools. Although much has changed in the school’s long history, the spirit of the students, teachers and administrators remains strong. In large part, the recent renewal of enthusiasm is due to Manassas High Schools principal James Griffin.

Five years ago, when Griffin took over leadership at the school, only 55 percent of Manassas seniors graduated. Three years later, that number soared to 100 percent — with every student going on to post-secondary schools. Today, an entire wall in the school’s main corridor is papered with acceptance letters from colleges and universities from across the state and around the country.

“For me, the question is, ‘What happens after graduation?’ We have to keep our young people in the game until they know there’s a game going on,” Griffin said. “Our mission is college, but I can’t fulfill that mission without the support of community partners such as Regions.”

The Regions Senior Institute is just one of the financial education programs Regions sponsors in schools like Manassas across the states where the bank operates. EverFi, with its series of dynamic, digital financial and civic education programs, is another. In 2010, Regions became a flagship sponsor of EverFi’s financial programs. Since then, the bank has sponsored more than 120 schools in eight markets and impacted more than 40,000 students and adults.

“EverFi teaches students the critical things they need to know through interactive lessons, videos and online assessments,” said EverFi Vice President Trey Medbery. “There’s a gap between what students are taught in school and what they need to learn to be successful in life. EverFi tries to close that gap. We create our learning courses and work with partners who fund the programs in communities that are important to them.”

This year, Regions also sponsored 306: African-American History, EverFi’s first African-American civic engagement program. The program is designed to instill in students a sense that anything is possible. The name “306” is a reference to a recurring theme in African-American history, such as the Harlem artists collective “Group 306″ and the room number at the Lorraine Motel where Dr. Martin Luther King was staying when he was assassinated in 1968.

Manassas High School was one of 35 schools to host the four-hour interactive course sponsored by Regions, which covered topics including the Underground Railroad, Jim Crow laws and the Harlem Renaissance, and profiled heroes such as Frederick Douglass, Madam C.J. Walker and Phillis Wheatley. In total, more than 2,200 students at those schools completed nearly 20,000 hours of 306 programming.

“The knowledge that EverFi offers through its financial and black history content builds a sense of pride and confidence in the students,” said Tressa Ogles, Regions’ West Tennessee Marketing Manager. “When we go into schools, we hear the students talk about their hopes and dreams, and we want to do everything we can to help them achieve those dreams. When I learned about our partnership with EverFi, I knew this was something we needed to champion in our local schools.”

Back in the Manassas High School library, Amy Cresswell greets her first class of the morning. Today, her topic is credit scores. Some of the students are joined by their parents, who are also interested in learning about the financial challenges their college-bound children will face in the future.

Seventeen-year old Aaliyah Hardin listens attentively as Cresswell explains the importance of building credit and maintaining a healthy credit score. Hardin plans to become a pediatrician and has already been accepted to several colleges. She smiles and nods as Cresswell outlines the reasons for financial responsibility. You can almost see the light bulb turn on above her head as the concept of credit takes on relevant meaning.

“Your whole life, you’re going to be spending money and signing up for different things,” Hardin said, smiling. “If you go over the balance on your card, you have to pay a lot of money. I learned that today.”

As the Manassas Class of 2015 carries away their newfound knowledge of financial matters into their next stage of life, Principal Griffin could not be prouder. “We know the earlier you can learn these skills, the sooner great habits are formed,” he said. “Regions programs have helped us set some things right and get our young people on the track to become financially responsible.”